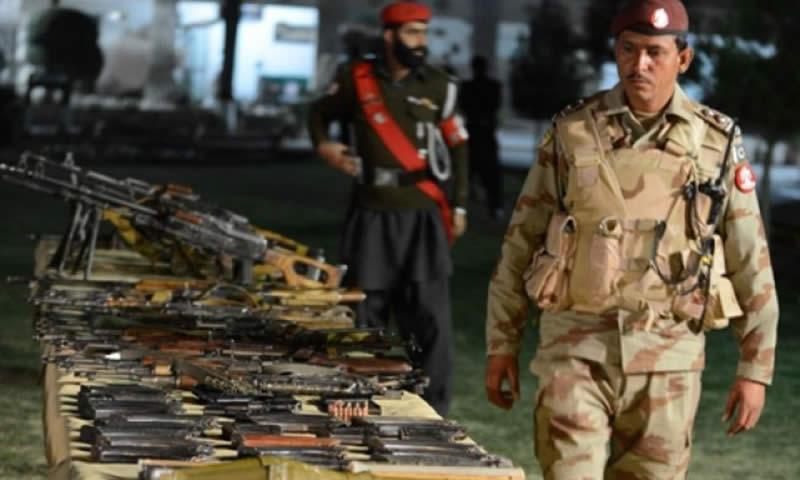 Five leaders and 23 members of the banned militant organisations surrendered in Quetta and Panjgur on Monday.

The minister described the surrender as a big achievement of the government because the men were said to be the “right hand of Barhamdagh Bugti”. He said they had abandoned the armed struggle against the state and decided to join the mainstream. Now they would work for the development and prosperity of the country, especially Balochistan, he added. Sattar Masoori said he went to Afghanistan in 2006 and spent most of his time in Nimruz province. He said the BRA had set up 20 to 30 camps in Sobatpur, Panjgur, Khuzdar, Dera Bugti and other areas. He claimed that the Indian intelligence agency RAW and Afghanistan’s National Directorate of Security (NDS) were behind funding and training of the BRA militants.

The RAW and NDS personnel trained BRA militants in its camps, he said, adding that providing arms and ammunition and transport were also their responsibility. He said he and many other BRA militants had received training to carry out subversion activities in camps in the Afghan district of Spin Boldak and Nimruz. “I was commanding 20 camps of BRA in Dera Bugti,” Masoori Bugti said, adding that Najeebullah Bugti was responsible for camps in Chagai. “We have abandoned fighting against the state and decided to serve our people by joining the mainstream,” he said. The home minister said the government would provide financial help and protection to those militant leaders who had surrendered under the Puramn Balochistan package.