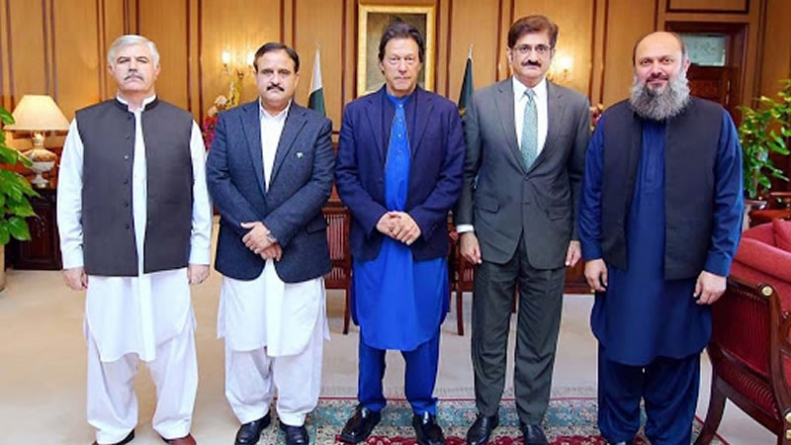 As Pakistan’s countrywide COVID-19 case tally soared to 875 on Monday, the Centre and the provinces still did not appear to be on the same page when it came to working out how to curb the proliferation of the highly contagious virus.

At a time when every hour and every minute is crucial in the fight against the pandemic and total coordination is vital if the country hopes to stamp out the contagion, the federal and provincial governments seemed to be out of step in their strategies to deal with the crisis.

Islamabad, the federal capital, is open. There is no lockdown, as if there is no coronavirus there, while the provincial governments have introduced lockdowns of various degrees.
Islamabad and Rawalpindi are twin cities – one has freedom to move around and the other is in lockdown. Majority of workers in free Islamabad would need to come from a locked-down city.

The provincial governments have closed all their offices, along with private offices and factories, etc, with exceptions to essential services. According to the Punjab notice, officials of government departments on duty would be allowed freedom of movement as well.

So in effect, if one family member is working for the federal government, he or she would go to work, while another person from the same family would remain in isolation at home if he or she works for the private sector or the provincial governments.

One city, two sets of laws. The lockdown objective is gone for a sixer.

The lockdown degrees are varying. For example, Punjab allows take away and delivery of food, as is in the west, but it is banned in Sindh.

Similarly, Sindh restricts fuel to no more than 10 litres, while there is no such restriction in Punjab.

The Sindh government has allowed a single member of each family to leave home once every 48 hours to purchase essential goods, while Punjab allows two persons to do the same.

The Sindh government took the lead when it went ahead with a lockdown of the province for 15 days from Sunday midnight, prohibiting all inter-city and inter-provincial travel along with gatherings of any sort, including those convened for religious purposes.

All offices, institutes and business were to remain closed except for those providing essential services such as healthcare, food and related industries, grocery stores and pharmacies, essential municipal services, electricity, gas supply, water and sewerage, telecommunication and cellular services, banks, fuel stations and welfare organizations.

It also allowed those facing medical emergencies to be escorted to health facilities accompanied by a necessary number of attendants. ‘Unavoidable’ religious rites, like funeral prayers and burials were also exempt provided that all COVID-19 precautions were taken and permission was obtained from the local police station house officer.

At the same time the Sindh government banned all public transport, including taxis, rickshaws and ride-sharing services, from plying the road and the Karachi commissioner also prohibited all food delivery and takeaway services.

The Balochistan government took the same measures as Sindh on Sunday as well, keeping more or less the same restrictions and exemptions as the latter.

On Monday, the Punjab government, after much double-mindedness, appeared to take a page out of Sindh’s and Balochistan’s playbook and issued a list of COVID-19 restrictions that appeared to largely mirror those currently in force in the southern province. Like Sindh, Punjab enforced a complete ban on inter-district and inter-province movement through all means, along with gatherings of all sorts, according to the notification issued late night by Punjab Home Department. Citizens were provided limited freedom of movement within their cities but in Punjab’s case two family members would be allowed to leave to buy essential items. Those facing medical emergencies could also be escorted by two attendants to health facilities.

Both Sindh and Punjab also allowed elderly citizens to be assisted by a driver.

Punjab also allowed exemptions to provide essential services, which for the most part, followed those listed in the Sindh government’s notice.

However, a key aspect where Punjab seemed to breakaway from Sindh’s strategy was in not closing down public offices. According to the Punjab notice, officials of government departments on duty would be allowed freedom of movement as well. Punjab also made and exception for takeaway and home delivery services by restaurants, cattle and livestock markets, and defence related manufacturing industries. However, it instructed large department stores to only admit customers in small groups.

In contrast to Sindh and Punjab, Islamabad Capital Territory authorities enforced a partial closing down time of markets and shopping malls, without seemingly imposing any restrictions on intra-city or inter-city movement of citizens.

The ICT notification allowed vendors of essential food items and groceries, pharmacies and auto workshops to keep their shops open. Although restaurants were prohibited from providing dine-in services, takeaway and delivery were allowed.

The Khyber-Pakhtunkhwa government opted to skirt around the term ‘lockdown’, even as it brought in some restrictive measures in light of COVID-19. Instead, the K-P government announced a ‘public holiday’ from Wednesday March 24 to Saturday March 28, Sunday being one by default.

At the same time, it directed all markets, shopping malls and eateries to remain closed till March 29, and suspend all intra-district and inter-district public transport for the same period. No restrictions were applied to private vehicles and freight goods, and citizens were seemingly free to move.

The K-P government allowed banks and cellular service providers to remain open, but asked them to take preventive measures such as placing hand sanitisers at entrances, directing staff to wear masks and gloves, and not allowing more five customers in premises at a time.

The government of Azad Jammu and Kashmir (AJK) enforced by and large the same restrictions on movement and business as Sindh and Balochistan, imposing them the same day as the two provinces. However, the Gilgit-Baltistan government has only imposed restrictions on inter-district public transport and has allowed citizens currently in other districts to travel back to their home districts.

Although the federal government has so far still shied away from declaring a countrywide lockdown, it did on Monday approved the provinces and AJK’s request for the deployment of Pakistan Army soldiers in aid of civilian administration across the country. On Monday, COVID-19 – the contagious flu like disease that emerged in Wuhan city of China in December last year – made further grounds in Pakistan with the total tally of infections rising from 784 of Sunday to 875 in a single day.

The fight against the deadly pandemic appears to be long and tenacious; therefore, all stakeholders need to be on the same page and synchronise their strategies in order to win this battle.