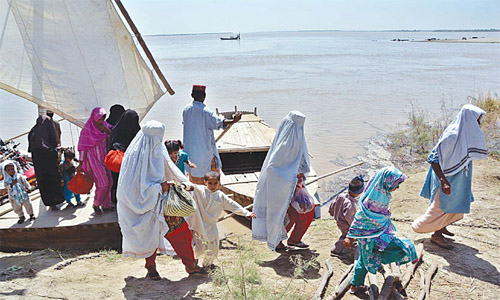 The flood peak entered Sindh on Wednesday, but left behind a trail of large-scale devastation from Sialkot to Rahimyar Khan in Punjab, swallowing 162 human lives and damaging private and public property worth billions of rupees. Another 102 people lost their lives during the 15-day driving rain which lashed north-eastern Punjab, taking the death toll to 264, according to Punjab cabinet’s Flood Relief Committee chairman Shuja Khanzada.

The river nevertheless considerably lost its fury before entering Sindh because of diversion of its water to hundreds of towns and villages, particularly in southern Punjab, through 193 breaches made in different embankments, including the main Athara Hazari upstream Trimu and Shershah and Mohammadwala bridges near Multan. The Flood Forecasting Division (FFD) had, prior to the breaches, estimated “high to very high flood” (700,000 cusecs) in Indus River, into which Chenab falls upstream Panjnad. It has now forecast “medium to high flood” in the Indus at Guddu and Sukkur. According to the FFD, the discharge at Guddu was 300,000 cusecs on Wednesday and expected to rise to 400,000 cusecs over the next 24 hours. The discharge at Sukkur was 180,000 cusecs and expected to rise to 250,000 cusecs on Thursday, it said, adding that the situation was not alarming in Sindh.

Reports from districts suggested that the floodwater was submerging areas around the river in Ghotki and Pano Aqil. There may be no spillovers, but property and crops in the river bed will be affected. Upstream, the discharge in Chenab at Panjnad was 380,000 cusecs and falling fast. There was no flood in Chenab anywhere upstream and all other rivers. Settlements around Chenab were badly affected. Floodwater was still gushing from minor and major breaches. Officials said the water would be drained out, but had no answer as to who would clear it from low-lying areas spread over hundreds of miles. Talking to journalists, Shuja Khanzada claimed that rescue and relief operations had been efficiently carried out in 21 flood-hit districts by the provincial government, army, NGOs and volunteers.

He said flood and rain had damaged 137,000 houses and crops over 238,000 acres in 2,847 Punjab villages. Most of the 193 breaches had almost been plugged. The three major breaches would be plugged over the next three to four days, he added. Mr Khanzada said compensation cheques had been distributed among the heirs of 80 per cent of the dead, adding that the initial rough estimate of the loss to infrastructure, including roads, schools and health centres, was Rs10 billion. The loss caused to private property will be estimated after some time, but it is expected to run into several billions of rupees. -dawn