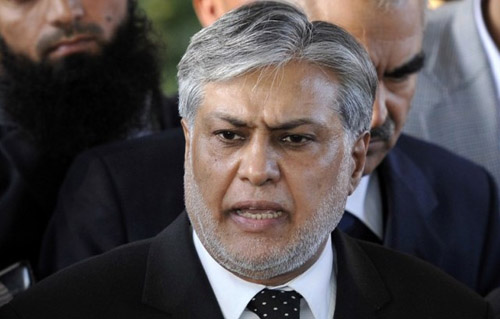 The government has decided to seek financial assistance from the international community for the rehabilitation of flood victims and Internally Displaced Persons (IDPs).  “We have received offers from many friendly countries such as Japan, Turkey, Saudi Arabia and international agencies for helping the flood-affected people but will utilise their assistance only after thorough scrutiny of the damage estimates by the World Bank, the Asian Development Bank and the United Nations Office for the Coordination of Humanitarian Affairs,”

Finance Minister Senator Ishaq Dar while addressing a news conference here on Wednesday. He said Pakistan would engage the international community for the rehabilitation of IDPs and flood affectees. “The government is carrying out relief activities for flood affectees and IDPs of North Waziristan Agency,” he said, adding that the government allocated Rs 35 billion for the NWA operation and IDPs.  Ishaq Dar said that the government would ensure transparency for utilising the funds to be provided by the international community, as there should be no wastage of money. He said that the country’s GDP growth target of 5.1 percent for the ongoing financial year would likely to be missed due to the damages caused to crops, houses and other infrastructure.  Talking about the PTI and PAT’s sit-ins, the minister said the country has faced a huge loss of $2.4 billion due to the political uncertainty that delayed three important transactions; issuing of Sukuk bond, divestment of OGDCL shares and IMF’s next tranche.

The government had planned to issue Sukuk bonds worth one billion dollars and generate $800 million from privatization of the OGDCL. $550 million were also expected as the next IMF tranche. “The government will miss its target of $15 billion foreign exchange reserves by the end of September due to the political impasse,” he remarked.  “Pakistan cannot afford to face such big losses,” said Ishaq Dar and added that the government would have to once again rebuild confidence of the foreign investors, as the sit-ins have sent a very negative message to the investors. “How will Japan’s Jetro give a message now that Pakistan is the second safest country for investment amid political uncertainty?” Dar said the government would recover the losses once the sit-ins are over. He made it clear that the government would not use force against the protesters, as they are using children and women as a shield.

Earlier, Jassim M Al-Khaldi, Charge d’ Affairs, Embassy of Saudi Arabia, called on Ishaq Dar. The minister conveyed greetings to the Saudi ambassador for the Saudi National Day. He also greeted Mr Khaldi and extended his best wishes for the current Haj season. Khaldi extended condolences from the Saudi ambassador on the colossal losses suffered by Pakistan in the areas of Punjab, AJK and Gilgit-Baltistan in the recent floods. Khaldi, on behalf of the Saudi government, assured that it would extend all possible assistance for the flood affectees. Ishaq Dar appreciated the Saudi diplomat and said that the combined task of rehabilitating the IDPs and reconstructing houses of the flood-affected people of Punjab, AJK and GB would be a quite huge task. But this will be completed by an independent committee formed for the joint management of reconstruction task in a fair and transparent manner, he added.

The minister said that though the recent calamity has made it difficult to meet the growth targets, the government is firm in its resolve to make Pakistan a success story in Asia. “We’ll achieve our growth targets in the years to come.” Agencies add: National Disaster Management Authority has said that flood water of Chenab River, after leaving Head Panjnad in South Punjab, has entered Sindh.  Metrology department has lessened category of the flood threat at Guddu Barrage saying there is no threat of extreme high-intensity flood. The flow of flood water at Guddu Barrage is 309,000 cusecs. After Kashmore, Ghotki and Kandhkot, the flood waster has entered in the katcha areas of Skikarpur, Sukkur, Larkana and Khairpur districts, inundating dozens of villages. Sindh Disaster Management Authority claimed to have established 122 relief camps in Kashmore, Ghotki, Kandhkot, Shikarpur, Sukkur, Larkana and Khairpur districts where over 12,000 flood affectees have been accommodated.

Sindh Chief Minister Syed Qaim Ali Shah said that the province is under the threat of a super flood.  He visited Guddu Barrage on Wednesday and told reporters that 400,000 to 500,000 cusecs of water will pass through Sindh. He added that the condition of protective embankments was satisfactory. According to the chief minister, the people living in makeshift housing were being shifted to safe locations. He further said that the performance of the Sindh and Punjab governments was in front of everyone to see.  [contentblock id=3 img=adsense.png] The Federal Flood Commission (FFC) said the River Chenab is flowing in high flood at Panjnad Headworks with falling trend. It said a high flood peak is expected to pass through Guddu Barrage during the next 24 hours. FFC said River Indus is at low flood stage at Guddu Barrage. Other main rivers including Jhelum, Ravi and Sutlej are flowing normal now. -nation