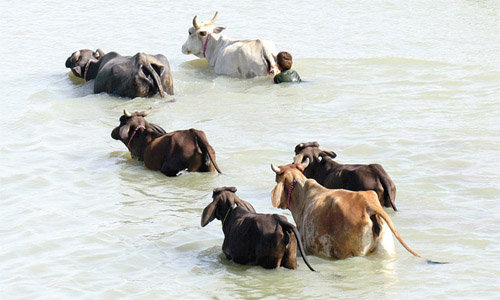 With a remarkable rise recorded in the Indus water level at Guddu and Sukkur barrages on Sunday night, the district administrations of Sukkur, Ghotki and Khairpur on Monday launched a massive operation to shift the kutcha area population to relief camps. Floodwaters overtopping some irrigation channels in Pannu Aqil inundated agricultural lands and more than 30 villages of the kutcha area, according to irrigation authorities.

Leader of the Opposition in the National Assembly Syed Khursheed Ahmed Shah visited the affected and vulnerable areas of Sukkur district on Monday and inspected the protective dykes. Earlier, the Sukkur Commissioner asked the Sukkur, Ghotki and Khairpur deputy commissioners to start shifting the entire population of the kutcha belt within the division to safe places before the floodwater could block the access to relief camps. [contentblock id=2 img=adsense.png]Irrigation officials informed him that floodwater inundated hundreds of acres of agricultural lands in the Sadhuja, Gidh Pur, Soomro Panhwari and Sangi areas before hitting the 30 villages including Bhalani, Raza Goth, Aziz Pur, Tahir Chachar, Mughal Mahar, Sajan Kariro, Kauro Bulelani, Hussain Beli, Jam Bahar, Mitho Indhar and Balocho Indhar in the kutcha area of Pannu Aqil.

The affected families along with their cattle heads were being shifted to relief camps set up at several hundred schools as well as tented villages established on strengthened dykes like Mitho Patan, Sargo Patan and Soomra Panhwari, where the health department has also set up medical camps. Thousands of residents of specified kutcha areas of Sukkur, Gambat, Khairpur, Kingri, Baberloi and other talukas have been asked to vacate their villages and move to safe places as soon as possible to avoid the loss of life, property and assets. Relief Commissioner Malik Israr Hussain, Sukkur Commissioner Mohammad Abbas Baloch.

Provincial Disaster Management Authority (PDMA) director-general Syed Salman Shah visited protective bunds of three districts of Sukkur division and expressed their satisfaction over the arrangements made by the provincial and district administrations as well as the PDMA for the safe and comfortable stay of displaced people during the passage of floodwater through the area and availability of all essential machinery and equipment to cope with any eventuality. Meanwhile, residents of 11 villages of Ghotki district were evacuated and shifted to relief camps on Monday evening. -dawn