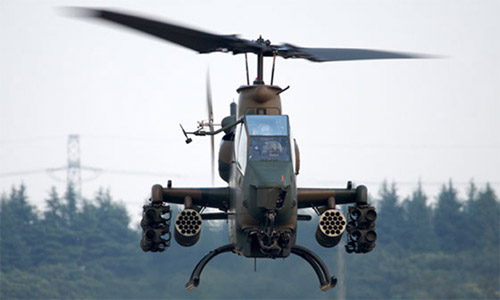 At least 15 suspected terrorists were killed when Army Aviation Combat helicopters carried out precision strikes in the Tabai area of North Waziristan Agency, said a statement from the Inter Services Public Relation (ISPR). These claims, however, could not be independently verified as journalists have limited access to the restive tribal agency.

Moreover, 10 explosive-laden vehicles and five militant hideouts were destroyed in the strikes, the statement added. Military operation Zarb-i-Azb was launched by the Pakistan Army on June 15 following a brazen militant attack on Karachi’s international airport and failure of peace talks between the government and Tehreek-i-Taliban Pakistan (TTP) negotiators. The Taliban and their ethnic Uzbek allies both claimed responsibility for the attack on Karachi airport, which was seen as a strategic turning point in how Pakistan tackles the insurgency. [contentblock id=2 img=adsense.png]

Nearly a million people have fled the offensive in North Waziristan, which is aimed at wiping out longstanding militant strongholds in the area, which borders Afghanistan. North Waziristan has been isolated by deploying troops along its border with neighboring agencies and Federally Administrative Tribal Areas (Fata) regions to block any move of terrorists in and out of the Agency.  General John Campbell Commander International Security Assistance Force (Isaf) called on Chief of Army Staff (COAS) General Raheel Sharif today at the General Headquarters in Rawalpindi, according to an ISPR press release.

[contentblock id=3 img=adsense.png] This is his first visit to the GHQ after assuming command of the Isaf. During the meeting, matters of mutual interest were discussed that included progress of the ongoing Zarb-i-Azb operation, latest situation in Afghanistan and coordination along the Pak-Afghan Border. Gen John F. Campbell was nominated to lead American forces in Afghanistan on August 26, 2014. He took over from Gen. Joseph F. Dunford Jr. -dawn