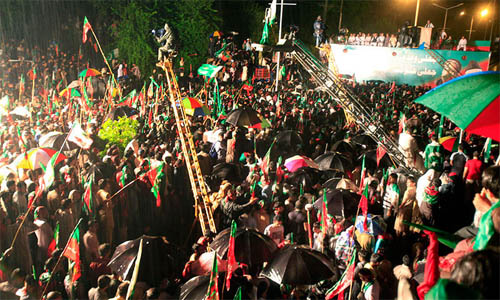 Work in government offices is being affected gravely because of the long marches in Islamabad as officials are watching new developments and guessing possible results of the protests.

“We are clearing only immediate routine matters as we are anxious to know what is next because we are the government machinery which is directly affected by any political move,” said an official of the Civil Secretariat on Tuesday. Except for the home department, the same conditions prevailed in all departments in the Civil Secretariat. Bosses were seen watching television and discussing the outcome of the long marches. The subordinates were obeying orders but they, too, were interested in knowing the latest in Islamabad rather than in work.

“What do you think will be the outcome of the marches,” asked a junior official of S&GAD instead of telling if there were any transfers or postings. Hectic closed-door meetings were however held in the home department reportedly to prepare for any situation that will emerge in case of the failure or the success of the marches. The topics or the outcome of the meetings were kept secret but worry writ large on the face of an official who attended a meeting. “Let’s hope the situation is positively handled,” he said.  -dawn