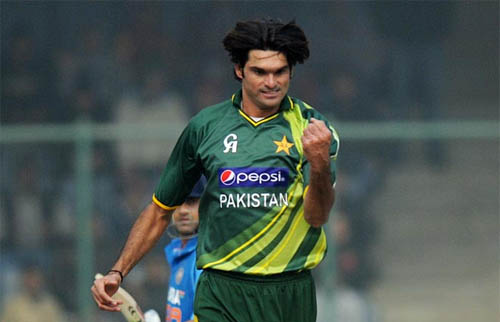 World’s tallest fast bowler Mohammad Irfan has been called up to replace unfit paceman Junaid Khan during the three-match ODI series against Sri Lanka. Junaid participation in the shorter version of the game is in the doldrums due to head injury the promising youngster sustained during the second Test against Sri Lanka in Colombo.

“Irfan has passed a fitness test conducted at the National Cricket Academy and has been asked to go to Sri Lanka on Wednesday,” said a PCB spokesman. The lanky paceman has escaped surgery which was certain due to his hip injury he sustained last November during a T20 match against South Africa in the UAE. Recently, the fast bowler has announced that he will not play Test cricket to make himself available for ODIs and T20 matches, saying he intends to resume international cricket in the upcoming series against New Zealand and Australia scheduled to be held in the UAE.

However, the fast bowler performance in the upcoming ODI series for which he has been called will be crucial for his future selection. Mohammad Irfan has played four Tests taking 10 wickets with average 38.90 while the left-arm bowler has taken 39 wickets in 39 ODIs with average 27.12. Moreover, his T20 performance is not impressive with seven matches to his credit taking three wickets with a poor average of 49.33. -dawn