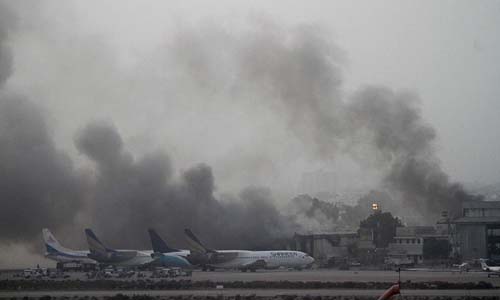 Security forces said Monday they have relaunched a military operation at Karachi airport as gunfire resumed several hours after they announced the end of a militant siege that left 24 dead. Fresh gunfire was reported from the airport Monday morning and a loud explosion was also heard across its premises. Pakistani Taliban claimed responsibility for the attack.

Security forces said that the intensity of the explosion heard across the airport was still uncertain. The initial assault at the Jinnah International Airport began late Sunday and raged until dawn, when the military said that all 10 militants had been killed. Equipped with suicide vests, grenades and rocket launchers, they had battled security forces in one of the most brazen attacks in years in Pakistan’s biggest city. Among the 14 victims were security personnel and four airport workers. We carried out this attack on the Karachi airport and it is a message to the Pakistani government that we are still alive to react over the killings of innocent people in bomb attacks on their villages,” TTP spokesman Shahidullah Shahid said. Pakistani Taliban claimed responsibility for the attack, saying it was revenge for the army’s air strikes in areas along the Afghan border where the insurgents are based. Another three rocket launchers, five suicide jackets, 15 petrol bombs and five SMGs recovered from the airport. Doctor Seemi Jamali of the JPMC said so far 18 bodies have been brought to the hospital.

Chaudhry Nisar has summoned a report of the incident from IG Sindh Police. The minister commended security forces on fighting terrorists during the crisis that enveloped the airport in Karachi. Chaudhry Nisar condoled with family members of those killed in the terrorist attack. Interior Minister Chaudhry Nisar Ali Khan strongly condemned the attack on the airport. Imran Khan said government’s policy towards tackling terrorism has failed. Pakistan Tehreek-i-Insaf (PTI) chairman Imran Khan said the attack on the airport was a matter of grave concern. An AFP reporter at the scene said gunshots could be heard inside the airport and that rangers and elite commandos were rushing inside. “We have relaunched the operation and called in additional troops,” said Sibtain Rizvi, spokesman for the Rangers paramilitary force.

A military operation was relaunched at the airport as gunfire resumed several hours after the army announced the end of a militant siege that left 24 dead. President Mamnoon commended the role of security forces during the operation against attackers. President Mamnoon Hussain condemned the attack on the airport saying the cowardly action could not overpower the government’s will to counter terrorism. A search operation was conducted by the security forces in the early hours of Monday morning during which five sub-machine guns (SMGs), three suicide jackets, two rocket launchers and 12 petrol bombs were recovered. Director General of Sindh Rangers, Maj-Gen Rizwan Akhtar addressing a press conference claimed that according to the initial reports, unidentified foreign militants appeared to be involved in the attack. At least 23 people have been reportedly killed, including security personnel. Ten militants were also among the dead. ISPR spokesman Asim Bajwa said the militants “were confined to two areas and eliminated.” Bajwa said weapons, live ammunition, including RPGs, were recovered from the militants. Bajwa said that they were wearing large packs on their bodies.

The ISPR spokesman said that Chief of Army Staff General Raheel Sharif “congratulated participating troops for a well coordinated, successful operation eliminating all militants”. He also said that Raheel Sharif “paid rich tribute to all shaheed and injured for their supreme sacrifice”. Some eight to 10 attackers were said to have engaged security forces in a gunbattle. Earlier, Pakistan Army troops were called in to deal with the situation and troops from Malir Cantonment have been dispatched, while police commandos and Karachi Rangers are assisting. A huge explosion was heard over two hours into the attack. A second large explosion was heard near the airport workshop. A third massive explosion was heard a further 30-40 minutes in. Huge clouds of smoke continue to dominate the skyline. Intermittent firing taking place at the airport, while large plumes of smoke were seen over the cargo terminal. One plane each of PIA and AirBlue, and a cargo plane of a foreign company were reported to have been damaged.

A hand grenade attack was also carried out on the Isphani Hanger. Suicide bombers were reportedly part of the militant squad that has infiltrated the airport. Staff is being rescued by security personnel and moved to safer areas. Rescue teams are being allowed in after being checked thoroughly. Passengers have been evacuated and moved to a secure location. Prime Minister Mian Nawaz Sharif called DG Rangers Sindh and asked him to ensure the safety of passengers. All flight operations at Jinnah Terminal have been suspended and flights have been diverted to other airports. Pakistan correspondent for the Daily Telegraph Rob Crilly reported that he had spoken to MQM leader Farooq Sattar and stated that, “He sounds calm but understandably concerned about being stuck on plane filled with aviation fuel.” -dawn