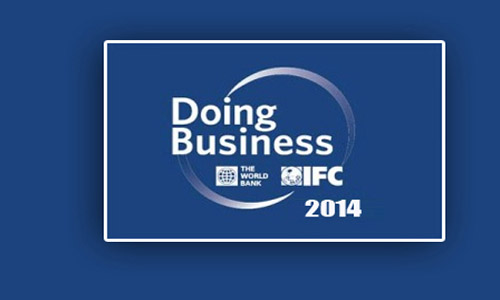 World Bank’s ‘Doing Business 2014’ report ranked Pakistan at the 110th position in 189 countries for lack of reforms to ease business environment. Earlier in 2013 it was at 107th position. In Pakistan, there are 10 cumbersome procedures to be completed in 21 days. In New Zealand, starting a business is easiest where it takes only one procedure, half a day.

The report ranked Pakistan 109th while dealing with construction permits. There are 11 procedures to deal with construction permits in the country, involving a period of 222 days. In Hong Kong and China dealing with construction permits is easiest, taking only 6 procedures and 71 days. Pakistan ranked at 125th position in terms of registering property, for which there are six procedures, required to be completed in 50 days. In terms of getting credit, the Business doing report placed Pakistan at rank of 73rd, while it is ranked at 34 in terms of protecting investors. UAE made the highest improvement in the strength of investor protections in 2012-13. Malaysia and the United Kingdom remain tied at the top of the ranking on the ease of getting credit. In some countries, the process of business registration, obtaining construction permits, advancing credit and starting business is easy and modest, while in others it is so tedious and time-consuming that businessmen and industrialist either bribe government officials to quicken the process.

Pakistan has been ranked second in the world in terms of business growth in a survey conducted by the Japan External Trade Organization. The survey which examined records of 9,371 Japanese firms operating across the world has put Pakistan just behind Taiwan in terms of business generated; leaving behind both India and Japan.  Pakistan’s data was generated from 27 Japanese firms doing business here. The results found that 74.1 percent of the Japanese companies estimated operating profit in 2013, allotting second rank to Pakistan only after Taiwan (81.8 percent).Compared to this, 60.7 percent Japanese firms in China and 45.8 percent in India made operating profit in 2013. A mega $ 2 billion project of Karachi Circular Railway is also on the horizon soon and will be a big boost in Japanese interests in Pakistan.  Pakistan has so far been able to assure only 70 Japanese companies for investment, majority of them in manufacturing sector, automobile industry in particular. Japanese investors in Pakistan forecast further improvement in their business during 2014. Pakistan is at 3rd position in micro finance business environment in the world according to analysis from the Economist Intelligence Unit, 55 countries, the business environment for micro finance.

“Pakistan is believed to have a micro- credit, regional and global environment more favorable,” the report stated. Pakistan, with a huge population of about 200 million and an average gross domestic product growth rate of 5 percent, is the fifth largest market in the entire Middle East, Africa and South Asia regions (after India, South Africa, Saudi Arabia and Egypt). It has a daring youth population and a large middle class of about 37 million. With English as the lingua franca of the industrial and business communities, contributing 60 percent of the GDP, and a legal system based on United Kingdom traditions, Pakistan has a number of easy facilities that make it an attractive market for multinational firms. In spite of deteriorating law and order conditions Pakistan offers many attractive trade and investment opportunities. With regard to investment, the market has few restrictions on the movement of capital no shareholding restrictions, no work permit issues, no technology transfer requirements; and it has a large and well established entrepreneurial class.

Pakistan is centrally located and serves as a regional hub for access to the Middle East, Southeast Asia, China, Turkey, and the Central Asian republics. It has a developed infrastructure, good legal systems, well- connected road, rail, and sea links; and developed telecommunications and information technology services. But Pakistan needs to further improve the business environment to make it easier to set up and operate a business. Over the past several years Pakistan has been losing its market share to all the major developing countries. Pakistan and European Union’s trade balance was at $10 billion. Its share in the European Union market is insignificantly one percent, while European Union’s share in the country’s market is 11.40 percent. The grant of the GSP plus status to Pakistan will open new trade passageways and increase the growth of textile exports. About 3,500 items will gain access to the European Union and the United States. The schemes will be for 10 years, which will give satisfaction to importers and exporters. The new GSP legislation involves enhanced the monitoring of conventions every two instead of three years. It will require increased scrutiny by the European Parliament.

The GSP plus status is granted to countries considered ‘vulnerable’ in their trade profile. Exports to European Union are not diversified; seven or less items make up at least 75 percent of their exports to European Union, and value less than two percent of EU’s total GSP imports. The scheme offers preferences above the standard GSP by covering roughly 70 more lines, mostly duty-free. Currently businessmen are finding it very difficult to continue their operations in Pakistan due to a number of factors. Most important among these is energy crisis and the security environment. The present government is trying its utmost best to solve this problem.  Nevertheless the business scenario is not at all dismal. Businesses in Pakistan have shown strong flexibility to a challenging environment by taking advantage of the numerous opportunities available. Pakistan is considered as a consumer economy, which allows them to raise cost pressure onwards. Resultantly, businesses have showed strong earnings growth, despite lower economic growth. 29 companies represent almost 65 percent of the Karachi Stock Exchange’s market capitalization.

The earnings growth is concentrated in major sectors, including, cement, fertilizer and telecom, which have shown encouraging growth.  Business environment now in Pakistan has been largely improving. In the past the employees in Pakistan had to work in a poor condition. Currently, all the rights that workers deserve are being provided to them by the employers in large manufacturing concern in Pakistan.  Pakistan is becoming ever-more competitive in the international market is because of the initiation of the economic reforms, foreign investors now feel more safe and secure while investing in Pakistan which is an impressively good sign for the country’s economy.  Pakistan has well-trained and skillful man power and workforce. Compared with India and Bangladesh the man-power in Pakistan also tends to be polite, honest, loyal and hardworking which is a really interesting attraction for investors around the world.  Apart from the business environment in Pakistan, the work ethics and the internal business environment has also improved considerably and a safe working environment with full financial security is provided to the employees. Pakistan needs to further improve the business environment in all spheres of business activities in small enterprises to make it easier to set up and operate a business.

In Pakistan doing business is easier in Faisalabad and Multan but more difficult in Quetta Gujranwala and Hyderabad. Continued reforms in Pakistan have reduced start-up time and costs, but the number of procedures remain high. Business start-up takes on average 21 days. It is easier to start a business in Islamabad than in any other Pakistani city—it only takes 16 days. In some countries, the process of business registration, obtaining construction permits, advancing credit and starting business is easy and reasonable. Pakistan can learn from each other and adopt good practices already working in the country. Pakistan needs to further improve the business environment to make it easier to set up and operate a business. The IMF is of the opinion that restoring macroeconomic stabilization and alleviating some of the bottlenecks and inefficiencies in the economy would help boost growth and job creation. Pakistan’s economy would grow to the vicinity of 5 percent by the end of just-approved economic programmer in the fiscal year of 2015-16. According to the second quarterly report of the SBP for the current fiscal year, there is a distinct improvement in the country’s macroeconomic indicators but deep-seated structural reforms are still required to ensure the continuity of such a positive trend.

According to it, ‘inflationary pressures have softened and foreign exchange reserves and the Pak Rupee parity have eased in December, 2013; Large Manufacturing Industry is showing improvement, which is supported by an increase in credit to the private sector.  Average inflation during fiscal year 2014 is now expected to range between 8.5 and 9.5 percent and Gross Domestic Product Growth is likely to remain in the range of 3.5 to 4.5 percent. The State Bank expects the overall fiscal deficit to be between 6 and 7 percent of GDP for fiscal year 2014. On the revenue side, FBR missed its tax target by Rs 80 billion during July-December, 2014, implying that the tax receipts had to grow by as much as 36.6 percent in January-June, 2014 to meet a full-year target.  GDP growth rate is expected to be higher between 3.5 to 4.5 percent due largely to an improvement in the LSM as against the initial projection of around 3 percent and inflation is likely to remain in the range of 8.5 to 9.5 percent as against the earlier estimates of double-digit.

After devaluing by around 6 percent against the dollar in the first six months of fiscal year 2014 the rupee surprisingly appreciated by 7 percent in the January-March 2014 period, making it one of the best performing currencies in the world so far in this calendar year. After the State Bank’s foreign reserves touched a multiyear low of around $3bn in February. According to the International Monetary Fund Pakistan economy is showing signs of improvement and that its reform program remains broadly on track. Saudi Arabia gifted $1.5 billion to Pakistan to help Islamabad shore up its foreign exchange reserves, meet debt-service obligations and undertake large energy and infrastructure projects. The Saudi assistance has contributed to a sharp recovery of the Pakistani rupee, which rose to a nine-month high of 97.40 from 105.40 against the dollar between March 4 and 12, its strongest rally in 30 years. According to the finance ministry, gross official reserves – including the latest injection of $1.5 billion – stood at $9.52 billion on March 11. A third loan tranche of $550 million from the International Monetary Fund, expected before the end of March, will push reserves close to $10 billion. Pakistan is expected to receive $150 million from the Islamic Development Bank in March, as well as $150-200 million under the Coalition Support Fund, reimbursements for assistance in the U.S.

led coalition’s Afghanistan war effort. Pakistan will also launch Euro bonds of $500 million in May and plans to raise billions of dollars in privatization revenue by June. An increase in foreign investment and remittances by overseas Pakistanis has also helped lift the rupee. Remittances increased by 11 percent to $10.2 billion during the first eight months of this fiscal year. Pakistan has the potential to become 18th largest economy of world by 2050, leaving behind many strong economies, according to Jim O’Neill, a British economist. According to his projections for 2050, Pakistan would become the 18th largest economy in the world by 2050 with a GDP of US$ 3.33 trillion (almost the same size as the current German economy).This means that, if O’Neill’s projections are correct, Pakistan’s economy would grow 15 times in the next 35 years or so. Thus Pakistan business would have a favourable and stable environment for both private and international investors to do their business smoothly.