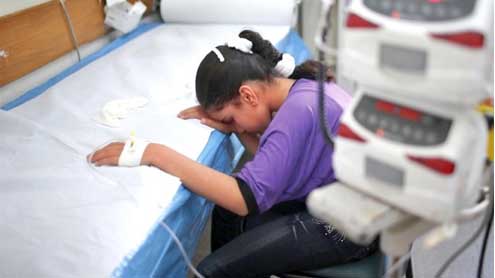 Two Afghan consulate officials were among those killed in the blast, the Afghan consul general told Media.The bomb was attached to a motorcycle that had been parked on a service lane near a bus stop, about 10 feet away from where a police mobile was parked.As a result of the blast, five people were killed on the spot, while dozens, including four policemen, were injured. Two buses packed with passengers were badly damaged in the explosion, while the police mobile was also damaged slightly.

The injured victims were shifted to the nearby hospitals, where four of them succumbed to their injuries, pushing the death toll to nine. Five of them are stated to be in critical condition.SP Cantt Faisal Kamran told Media that four policemen, who were sitting in the mobile vehicle, were also injured but since the mobile was shielded by the buses it was spared the brunt of the explosion. He did however warn that they were expecting more such attacks in the coming days.

Initially, the blast was mistaken to be a suicide attack. However, by evening the BDS team had gathered enough evidence that suggested the bomb was planted on a motorcycle.AIG Special Branch and head of Bomb Disposal Squad (BDS) Shafqat Malik said the mistake was made because they had recovered body pieces from the site of the blast, which they initially assumed belonged to a suicide bomber. “The ill-fated person whose body was found in pieces could have been a passerby, but he wasn’t a suicide bomber,” he explained.

Afghan Counsul General Syed Muhammad Ibrahim Khel said the two officials had been working in the Afghan consulate in Peshawar and did not have diplomatic status.Khel said that Hilal and Idrees were headed to their office in the University Town area when the blast occurred.Afghan embassy spokesperson Shams Zadasht says that Afghan authorities have requested the Pakistani police to share details of their investigations into the attack.Zardasht told Media that he was not sure if the two Afghan consulate employees were the target.

At least one person was killed while 15 others, including Awami National Party workers, were wounded in a blast targeting a convoy of ANP candidate in Charsadda district Monday evening.DSP Salim Riaz told Media said that ANP’s Muhammad Ahmad Khan was leaving his election office when a remote-controlled bomb planted in the middle of the crowded Sardheri Bazaar went off near his vehicle.

Meanwhile, a bomb planted by unidentified militants near the hujra of ANP local leader Haji Khan Daraz, detonated in the Katlang area of Mardan early Monday morning.While the hujra was partially damaged, no human loss was reported.Meanwhile, an Awami National Party candidate’s security guard was gunned down by unidentified attackers in the Hakeemabad area of Nowshera district Monday afternoon.