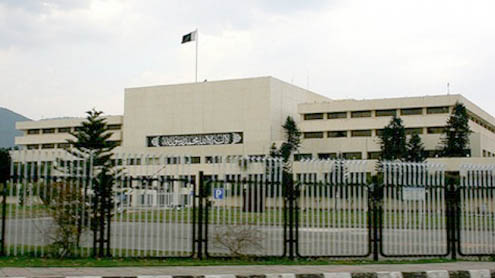 ISLAMABAD: Continuing debate on the prevailing law and order situation in the National Assembly, a PML-N lawmaker, on the first private member day of the last session (50th session), proposed a joint session of the parliament on the matter.

“Officials of secret agencies, police and FC should brief the parliamentarians o the prevailing law and order situation in Balochistan,” PML-N lawmaker Khwaja Asif urged the government, taking part in the debate with particular reference to the recent gory incident in Quetta.Agreeing to the proposal of PML-N, PPP chief whip Syed Khursheed Shah said he would convey this demand to the prime minister, adding the joint session would be held in current or next week. “The government will not neglect this sad incident,” he added.

The house, with the thin presence of lawmakers from both the sides, witnessed separate walkouts of PML-N and MQM over the Quetta incident.The lawmakers from treasury and opposition benches with the demand of ‘no other agenda’ forced the chair not to take legislative business despite the desire of some lawmakers.PML-N lawmaker Khwaja Asif strongly condemned the Quetta incident and remarked that even serial killers were available on payment in installments. Pointing to the picture of the Quad-e-Azam, Khwaja Asif said he belonged to Shia sect.

“He is remembered as the founder of Pakistan,” Asif added. The PML-N leader told the house that a specific mafia was trying to purchase property of the members of Hazara community who were intending to migrate to other areas. “I fear this kind of terrorist incidents will increase till the upcoming elections,” he added.MQM legislator Waseem Akhtar endorsed the proposal of PML-N regarding a joint session, adding they could order the heads of security agencies to arrest the Lashkar-e-Jhangvi activists as mere in-camera briefing would not serve the real purpose. He said offices of the banned outfit were in Punjab and there should be proper mechanism to take action against them.

Another PML-N legislator Abdul Qadir Baloch said that religious scholars should come up with clear stance on this situation. “Civil disobedience is being sponsored in Balochistan. It is not understandable why the killers of Hazara community are not arrested,” he said, adding the government had not taken the matter of Balochistan seriously.PML-N MNA Zafar Bhittani said the government should quit if it could not deliver. He, after completing his speech, left the house in protest.Having the same sentiments, PML-N MNA Barjees Tahir said the chief secretary should be dismissed over his poor performance. “The government is responsible for this situation in the country,” he added.

On her turn, PPP MNA Fakhr-un-Nisa Khokar was of the view that mere speeches could not resolve this complicated matter as proper surveillance and monitoring was needed. “Those who cannot provide proper security should resign,” she added.ANP’s young legislator, Hamyat Ullah, said the banned outfits, after changing their names, were active in the country. “It seems civil management has failed to discharge its functions, so the army and FC officials should be summoned,” he said. PML-Q legislator Bahadar Khan Sehar said criminals were roaming in the country without any proper check on them.

INP adds: In a rare show of unity on critical issues, ruling Pakistan People’s Party and the opposition PML-N Tuesday agreed to the holding of a joint sitting of the Parliament to discuss the situation in the wake of Saturday’s blast in Quetta.Participating in the debate on the Quetta incident, PML-N leader Khawaja Asif proposed that a joint session of the Parliament should be summoned on the issue. He said officials of secret agencies police and FC should brief the people’s representatives on the prevailing security situation in Balochistan.

Other members said justice should be done to the people of Balochistan, brining those involved in the massacre of Hazara community to justice.They said the law-enforcement agencies should be equipped with latest technology and coordination among the intelligence agencies enhanced to control the situation in Balochistan.The members said the law-enforcement agencies should take strict action against the banned outfits. It was the responsibility of all the political parties and democratic institutions to find remedies to the problems, including terrorism and extremism, being faced by the country. They underlined the need to change the curricula of religious seminaries to fight the issue of sectarianism.

Those who spoke on the Quetta tragedy included Naseer Bhutta, Sardar Bahadur Khan Sihar, Ijaz Virk, Barjees Tahir, Maulvi Asmatullah, Himayatullah Mayar, Fakhr-un-Nisar Khokhar and Abdul Qadir Baloch.Syed Khurshid Ahmad Shah called upon all the political parties to join hands for the elimination of terrorism from the entire country. He said those attacking the innocent people were not humans.The minister said the government was in contact with all the relevant departments in the province to control the situation. The Supreme Court had also taken suo motu notice of the tragedy. He added the bereaved families had agreed to bury those killed in the incident. He reiterated that all possible measures would be taken to address the grievances of the Hazara community. – Nation