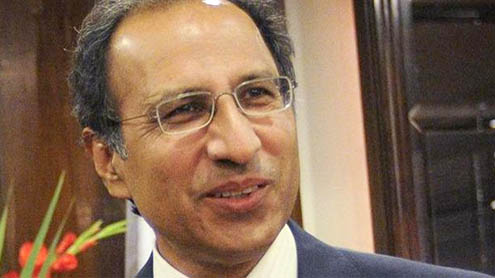 ISLAMABAD: Finance Minister Abdul Hafeez Shaikh resigned on Tuesday, two officials said, amid speculation that he may lead a caretaker government that must be set up before national elections scheduled for this spring.

Shaikh will be replaced by the state minister for finance, Saleem Mandviwalla, said one official in the finance ministry and another high-ranking government official.Shaikh, who holds a PhD in economics, taught at Harvard University and worked at the World Bank for several years, advising 21 countries, including a stint as World Bank country head in Saudi Arabia.He leaves as the Pakistan currency has slid to a historic low of Rs 98 against the dollar and the economy is beset by inflation, daily power cuts and plummeting foreign investment.

Pakistan only has enough foreign reserves left to pay for two months worth of imports. In 2008, that situation prompted a balance of payments crisis only ended when the International Monetary Fund offered a bailout package of $11 billion.But in 2011, that programme was suspended after Shaikh was unable to push through key reforms, most notably widening Pakistan’s tax base.

Financial analysts say that others in the ruling party share the blame for that failure. Most of Pakistan’s top politicians and their elite backers don’t pay taxes and are not keen to see reforms. The IMF has said it will not consider rescheduling repayments of the $6.2 billion Pakistan still owes without a comprehensive plan for reform agreed on by all political parties. – DailyTimes