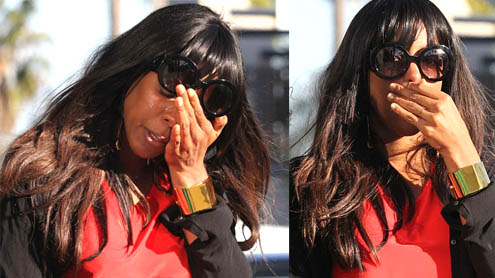 She was celebrating her birthday with best friend and superstar Beyonce but soon after Kelly Rowland’s joy turned to pain.

The singer was seen in floods of tears outside Gjelina Restaurant on trendy Abbott Kinney Boulevard in the Venice area after her birthday lunch.It’s unclear what caused the upset, but Kelly suddenly appeared overwhelmed by her emotions as sobbed away in the street in LA.The star wiped away her tears after dining with former Destiny’s Child band mate Beyonce Knowles, her rapper husband Jay-Z and sister Solange Knowles.As she stood on the side of the road with a friend keeping a watchful eye over her, it was difficult not to notice the vocalist, who donned a bright red top with three-quarter length black and white trousers.

She teamed it with a black cardigan and gold drop earrings as well as a chunky bangle and clutch bag.But her prim and proper look was compromised as she had to keep removing her large circle sunglasses to wipe her wet cheeks.It seems it was a very emotional lunch for Kelly and her cousin Beyonce – who refer to each other as ‘sisters’.On the same day Beyonce had posted an old black and white snap of the pair fooling around as a bunny ear-wearing Bey stuck up two fingers behind Kelly’s head. She wrote alongside the cute photo: ‘Happy Birthday to my sis Kelly!

When Kelly was seven, her mother took her and left her father, who was an abusive alcoholic. At the age of eight, she relocated to Houston and was placed into a group with Beyonce originally named Girl’s Tyme.To manage the group, Mathew Knowles, Beyoncé’s father, resigned in 1995 from his job as a medical-equipment salesman and dedicated his time to establish a ‘boot camp’ for their training. At this time Rowland moved in with the Knowles family. Kelly recently gushed about getting to perform with the woman she sees as her sibling, after so long working apart.

She told E! News: ‘When I looked on the other side of the stage at the Super Bowl and I saw Beyoncé and Michelle [Williams], my heart just went into my throat. I was so happy. It was just such a beautiful moment.‘Now everybody’s asking about other things, if we’re gonna do other things.‘We’re like “No, we’re still doing our solo things,” Michelle’s doing Fela! B’s about to start the Mrs. Carter Tour. We’re just supporting each other. We had a moment for the Super Bowl. – DailyMail