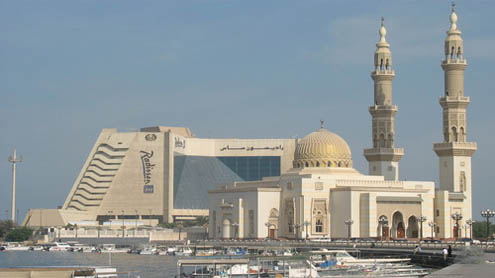 Sharjah’s mosques are shining bright. The beauty of their magnificent architecture and motifs have been illuminated and celebrated like never before.

The Sharjah Light Festival 2013, specially created for the emirates’s monuments, throw light on Islamic architecture and civilisation.The three magnificent mosques in the limelight are Al Noor Mosque and Al Majaz Mosque overlooking the Khalid Lagoon and the historical Omar bin Al Khattab Mosque in Khorfakkan on the East Coast.The three mosques gleam and sparkle in a magic interplay of lights and colours, illuminating the emirate’s colour-tinted skyline and balmy evenings and attracting thousands of visitors from across the country and beyond.

Using special techniques of lighting, video technology, computer graphics and a riot of colors, internationally acclaimed experts and artists have created a fascinating mosaic, playing up with the columns and arches and highlighting domes and minarets in a tribute to the beauty of Islamic architecture.

The Sharjah Commerce and Tourism Development Authority says the goal of the festival of Lights is not just to entertain and enthrall, but to highlight the richness of Islamic heritage and culture and diversity of Sharjah, attracting visitors from across the region and the globe to visit the emirate exploring its landmarks, rich Emirati history and the legacy of ancestors which is cherished and protected to this day, making it worthy of a number of titles as the Capital of Arab and Islamic culture and tourism.