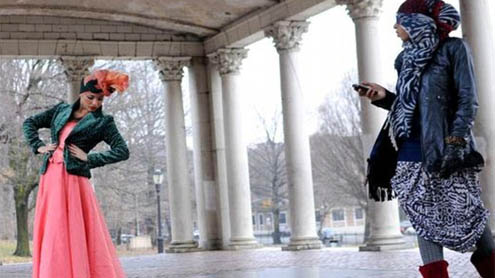 The founder of an agency that represents Muslim models is proving that women can dress modestly and walk the catwalk at New York Fashion Week.

Nailah Lymus launched Underwraps Agency last year, and she is also a designer, stylist and practicing Muslim who merges the world of secular fashion with the sanctity of Islamic customs.The 29-year-old, who styled the headpieces for the Ann Nahari show last weekend, told ABC News: ‘You can be modest and still be fashion-forward and stay true to your faith.’For practicing Muslims like Ms Lymus, the figure-hugging, flesh-baring fashion world is often regarded as incompatible with their faith.

And with labels receiving more attention the more skin they reveal, needing to cover up on the catwalk for religious purposes is hardly a selling point for aspiring models.But the U.S.-born, New York-based fashion designer is determined to bridge the gap between modesty and high fashion.’Women can be covered and confident,’ she says. ‘Secure and beautiful.’Last year, Ms Lymus founded Underwraps Agency, a modelling company which specifically recruits Muslim women.

‘These girls have everything – the height, the look. And it’s like a dream deferred because they dress a certain way,’ she explains.According to their religion, Muslim women cannot wear tight clothing or expose their cleavage or hair.In fact, no skin can be shown at all except for hands, feet and face, which is difficult to achieve in the modern fashion world.But Ms Lymus insists that despite the conventions of her faith, Muslims can be just as stylish as any other women.

‘Muslim women are fashion-forward,’ she asserts. ‘We embrace everything that other women do, but we just have certain stipulations.’Before launching Underwraps, the designer was careful to get the approval of some imams and elders in her community, who all agreed that it would be a great way to break down stereotypes and to show how fashion can be relatable to Muslims.Hajer Naili, one of the models she recruited, shares Ms Lymus’s feeling that contemporary fashion does not leave much room for conservatism.

‘I have always been into fashion,’ said the 27-year-old catwalker. ‘But from what I’ve seen so far, as a model you have to show your body.She continued: ‘I’m just not comfortable with that. I follow certain Islamic guidelines and stick with that as much as I can.’Ms Lymus’s modeling agency currently has contracts with four Muslim models, one of whom walked in the Ann Nahari show for New York Fashion Week.

While the company gives women a chance to express themselves through fashion that does not focus on daring to bare, it also represents an effort to break down common misconceptions about the Islamic world.’There’s a thought that Muslim women can’t work or go to school or dress fashionably,’ said the designer. ‘I want to get rid of that misunderstanding in an inviting forum.’Although Ms Lymus is mostly focused on hiring on Muslim models, she ultimately wants Underwraps to represent modesty in general, encompassing multiple religions and cultures.In 2004, she launched her own fashion label, Amirah Creations, for women who desire a little modesty in their clothing. – DailyMail