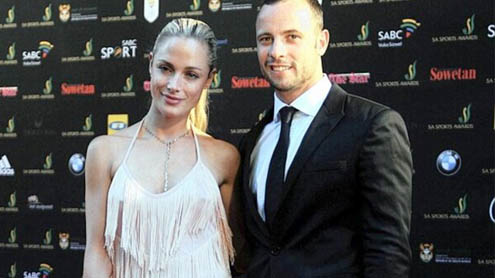 South African paralympic star Oscar Pistorius has been charged with murder and is in custody after reportedly shooting his girlfriend dead in the middle of the night after mistaking her for a burglar.

It happened at 4am this morning and the woman may have been killed after a Valentine’s Day surprise went tragically wrong at his mansion in Pretoria.The dead woman is Reeva Steenkamp, 30, a former FHM model who has been dating Mr Pistorius, 26, for two months.She was shot in the head, the chest and the arm, police in the country have said, and Mr Pistorius will appear in court later today.’We have opened a case of murder’, Pretoria police spokesman Katlego Mogale said, adding they will be opposing bail.

Just yesterday Miss Steenkamp spoke excitedly on Twitter about her plans for Valentine’s Day.She said: ‘What do you have up your sleeve for your love tomorrow??? getexcited .Valentines Day’.Replying to a follower, she later added: ‘That sounds amazing! Wow that’s what it’s all about! It should be a day of love for everyone 🙂 may it be blessed!’Mr Pistorius, 26, is widely known as the Blade Runner, and has also been dubbed ‘the fastest man on no legs’.The Johannesburg athlete, who was born without fibulas in his legs and had the limbs amputated below the knee when he was 11 months old, had to win a legal battle over his blades with the International Association of Athletics Federations (IAAF) in 2008 for the right to compete in able-bodied competition.

He was the first double amputee to run in the able-bodied Olympics and reached the 400 semi-finals in London 2012.His agent Peet van Zyl is heading to Pretoria to speak to his client.’I hope I can have access to him at the police station,’ he said.’Oscar is a humble person and a lovely guy – I’m sure what’s happened has been a terrible mistake but I really don’t have the details at the moment.’Pretoria police spokesperson Katlego Mogale told the media that she could not confirm the man’s identity until he appears in court.She added that a 9mm pistol was recovered from the scene and a case of murder is being investigated.

Officers are still busy with preliminary investigations at the scene, and statements are being taken from neighbours on the luxury Silverwoods estate.Homes there are surrounded by a giant wall, with electric fences and armed guards who stop every vehicle leaving or entering to keep it secure in a country with high rates of violent crime.Around 50 people every day are murdered in South Africa and it is common for people to keep weapons in their home.In an interview with the Mail before London 2012 it was revealed Pistorius slept with a pistol next to his bed, a machine gun by a window with a cricket bat and baseball bat behind the door.

‘The problem is when the guards are in on the crime. It’s usually safe in guarded estates like this until that happens,’ he said.In an interview with the New York Times he took a reporter to the local shooting range to fire his 9mm handgun and two boxes of ammunition.When the journalist hit the bullseye he said: ‘If you practiced, I think you could be pretty deadly,’ adding he would go shooting ‘sometimes when I can’t sleep’.Arnu Fourie, Pistorius’s roommate during London 2012 said today: ‘My heart is broken for Oscar’.

‘I feel for Oscar and the girl’s family, I pray for him and her family, I can not imagine how they feel.’Poor Oscar in his life had so many disappointments and tough times’.Miss Steenkamp, a law graduate from Port Elizabeth, gave an interview to the Sunday Times in South Africa last week where she described her boyfriend as ‘an impeccable man who always her best interests at heart’.On February 1, Steenkamp tweeted about Pistorius, saying: ‘He certainly doesn’t need more followers but he’s beautiful to look at & says some smart stuff too ;).’

On her Facebook and Twitter pages, she describes herself as an ‘SA Model, FHM Cover Girl, Tropika Island of Treasure Celeb Contestant, Law Graduate, Ambassador’.This weekend, Steenkamp was set to star in South African reality television series Tropika Island Of Treasure, in which celebrities and ordinary people compete in remote, exotic locations in a variety of daily challenges.On the show’s website, a tribute to Steenkamp says: ‘We are deeply saddened and extend our condolences to Reeva’s family and friends.’Sarit Tomlinson, Steenkamp’s publicist, told Sky News: ‘She was the sweetest human being and an absolute angel on earth. She was the kindest, most unbelievable girl.

‘They had been together for a couple of months and it had been a healthy, fabulous relationship. At the moment it’s shocking. No-one knows what’s happened.‘She was a rising star. There was so much in the pipeline for her: she was just about to explode into the media.She was a very talented, very bright young girl. It’s too shocking for words. We’ll miss her so much, too much. Our condolences go to her family.’The blade-runner has done more than any other athlete to put the Paralympics on the global map since he first won medals aged 17 in the Athens Games of 2004.He was expected to take home a haul of paralympic golds at London 2012 but failed to deliver.

His first final was in the 200m, where he finished a shock second to Brazilian Alan Oliveira, and then accused rivals, including his young conqueror, of running on blades that were too long.Then Pistorius had to settle for fourth place in the 100m individual event when the glory went to Britain’s new track icon, Jonnie Peacock.But this defeat and the outburst were followed by a measure of redemption when Pistorius anchored his country’s 4 x 100m relay gold in a world record time.Just three days ago, Pistorius tweeted about his excitement regarding his first race of 2013, accompanied by a photograph of him in action.

He said: ‘1 month till my first race of 2013.. Can’t wait to burn it up!’Perhaps due in part to his sudden financial and sporting success, Pistorius has a notoriously complex love life.Prior to their split late last year, he spent a year and a half dating Cape Town marketing student Samantha Taylor.But even while he was with Miss Taylor, he was linked with numerous other women, including Russian model Anastassia Khozissova.Pistorius was first seen with Miss Steenkamp at an awards ceremony in South Africa last November.  At the time, the FHM model said the pair were ‘just friends’.

But when it became clear that Pistorius and Steenkamp were in fact dating, the sportsman’s then ex Samantha Taylor said: ‘Oscar has such a way with women. She’s probably not the only one he’s got.”Miss Taylor went on to tell South Africa’s City Press newspaper that ‘Oscar is certainly not what people think he is.’The 26-year-old sportsman has a history of risk taking and also, reportedly, of violence.In November last year, he reportedly ‘threatened to break the legs’ of the friend of a man whom he believed had slept with his then girlfriend, who is not Miss Steenkamp.According to newspaper reports, the sportsman approached South African football player Marc Batchelor in the VIP room of a horse racing track and verbally threatened him.

The sportsman’s determination to succeed also seems to be accompanied by a taste for danger.South African journalist Kalay Maistry told Sky News: ‘It is alleged that he thought his girlfriend, who’d come in to try to surprise him for Valentine’s Day, was an intruder. It’s alleged that he shot her in the arm and head.’I think what this actually highlights is the level of fear ordinary South Africans have.’This is a man who has gone to bed, it’s an innocent surprise from a girlfriend … and the moment he thinks someone is trying to break in he grabs his gun.’This has come as a complete surprise for a man who’s considered a national hero.’

On Pistorius’s website, a quote from Lord Coe from before London 2012 describes him as a ‘real inspiration to people around the world’, and a spokesman from sports giant Nike describes time with Pistorius as ‘some of the most inspirational time we’ve ever spent around an athlete’.Lord Coe said: ‘Oscar is an extraordinary athlete who has made a significant impact in international sport.’It will be fantastic to see him compete in London this summer – spectators can expect a real treat!

‘He’s been a real inspiration to people around the world so we were thrilled when he decided to join our International Inspiration programme as an ambassador, helping us to inspire young people worldwide.’Arturo Nunez, Nike emerging markets marketing director, said: ‘Nike routinely works with the best athletes in the world, and Oscar Pistorius stands out on that list.’Many world-class athletes visit Nike and amaze our community, but the two weeks that Oscar spent on campus last summer went down as some of the most inspirational time we’ve ever spent around an athlete.’