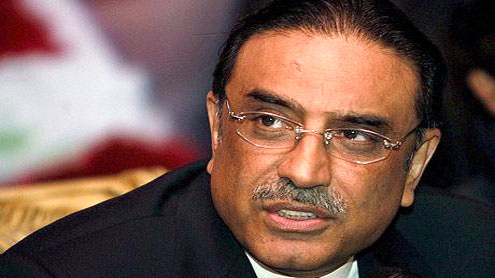 LAHORE/KARACHI: President Asif Ali Zardari has said PPP believes in fair and transparent polls and upcoming general elections will take place on time and will not be delayed even for a fraction of a moment.

“PPP has fortified democracy in the country by promoting the politics of reconciliation and harmony. We have laid foundation for bright future of the people. We have never come to power through backdoors nor have we taken shelter from the state institutions. PPP believes in fair and transparent elections. Polls will be held as per schedule which will not be delayed for an iota of a moment”, this was said by the President Asif Ali Zardari during his talks with PPP leader Abdul Qadir Shaheen at Bilawal house as per a statement issued by the latter Tuesday.

President asserted that “we will again come to power with the help of our coalition partners on the basis of performance”., statement added.On the occasion Bilawal Bhutto Zardari said “we are pursuing the manifesto and ideas of Shaheed Zulfiqar Ali Bhutto and Benazir Bhutto. Democracy has taken deep roots in the country and its fruits will trickle down to the coming generations.Democracy is key to the survival of the country, he observed adding it is healer to every wound and solution to every problem. Democracy is name of will of people and the present and future of the people lie with the democracy, he stressed.

Transparent elections are guarantors of solidification of democratic order and it was sole right of people to elect those whom they will, he held.President Zardari ousted a dictator from Aiwan-e-Sadr in line with the policy of reconciliation and he frustrated the conspiracy of dismemberment of Pakistan by raising the slogan of “Pakistan Khappe”, Bilawal remarked.He urged the political forces to play their due role in strengthening the politics of reconciliation rather than bringing back the politics of hatred so that conspiracies against the democracy could be thwarted. – Onlinenews