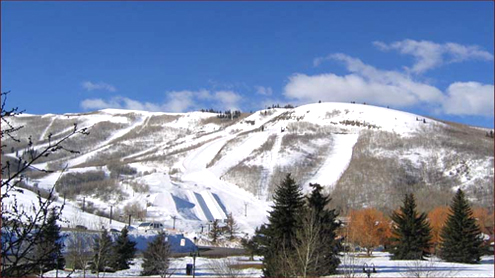 The 2002 Winter Olympics in Salt Lake City caused quite a stir between bribery scandals and referee controversies, but it was also one of the most successful Winter Olympics in history. Top events including Giant Slalom and snowboarding were held at Park City Mountain Resort, one of Salt Lake City’s premier ski resorts, just 34 miles outside the city. A mix of beginner, intermediate and expert levels, Park City Mountain resort boasts more than 114 trails, with an average yearly snowfall of 340 inches.

Arguably the largest ski resort in North America, Whistler Blackcomb is also one of the most visited. Made up of two peaks, Whistler Mountain and Blackcomb Peak, Whistler Blackcomb has more than 200 ski trails zig-zagging through the Fitzsimmons range. The 2010 Olympics divided all its ski and snowboarding events between the two peaks, so you’re sure to ski over some history when you tackle this ski resort.

Technically the 1988 Olympics were held in Calgary, but all alpine ski events were held at Nakiska on Mount Allan in Kananaskis County. A relatively small resort, Nakiska boasts only 64 ski runs, but you’re almost always guaranteed good skiing. Nakiska is now an official training center for Alpine Ski Teams around the world every year. Nakiska averages about 95 inches of snow per year, but has extensive snow-making abilities.

The first Winter Olympics hosted in the U.S. were held in Lake Placid, New York, and were officially opened by Franklin D. Roosevelt in 1932. Then in 1980, Lake Placid hosted the Winter Olympics for a second time. Whiteface Mountain, where the alpine ski events were held, stands to be one of the tallest mountains in the Adirondacks. Home to more than 22 miles of ski trails and 87 ski runs, Whiteface also averages more than 230 inches of snow per year.

Within twelve years of each other, Innsbruck, Austria was able to host two major Winter Olympics in both 1964 and 1976. In 1964, a normally very snowy Innsbruck hit an all-time low for snowfall and had to bring in 40,000 cubic meters of snow, which was hand-packed by the Austrian army along the trails. Innsbruck, the capital of Tyrol, is now one of Europe’s top ski destinations. Axamer Lizum, which was expanded for the 1976 Olympics, has the largest variety of ski trails, where there’s something for every level. Plus, visitors can enjoy day trips to Vienna or Salzburg, and tour Bavarian castles.

At the time, Sapporo was the first city outside of Europe or North America to even hold a Winter Olympics. Prior to 1972, Japan had never won a gold medal until Yukio Kasaya won in ski jumping. Mt. Teine, where all ski events were held, continues to be a hot Asia destination for skiing. After the Winter Olympics, the resort continued to host important events including the Asian Winter Games.

Averaging a whopping 450 inches of snowfall each year, Squaw Valley is the second largest ski resort in Lake Tahoe, and one of the largest in the United States, boasting more than 270 trails. In 1960, times when tensions between the U.S. and Soviet Union were intense, the U.S. threatened to not allow visas to countries like China, Taiwan and Korea. Nowadays, there’s plenty of Olympics memorabilia for visitors to see, including the plaque erected by Walt Disney on the Olympic flagpole.

The last Winter Olympics held before a twelve year break on the cusp of World War II, the Garmisch Partenkirchen games of 1936 were also the last year the Summer and Winter Olympics were held in the same country. Sitting on the border of Austria and Germany, in Germany’s southern province of Bavaria, avid skiers are able to ski in both countries down certain runs. Garmisch Partenkirchen is also home to Germany’s largest mountain known as the Zugspitze, and skiers can take a train from town and explore the famous Zugspitzbahn.

Although the Chamonix games of 1924 were technically the first Winter Olympics, they were called International Winter Sports Week. Resting at the base of Mont Blanc, Chamonix is considered some of the best skiing in the French Alps. At the time, the only ski events that took place were ski jumping and cross-country skiing, but rest assured you’ll carve up plenty of powder down these slopes nowadays. –