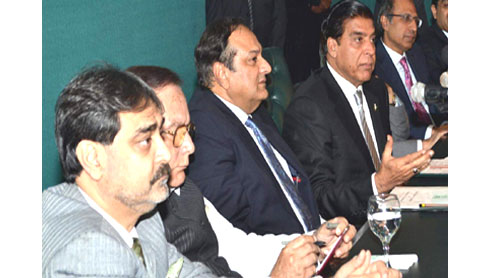 LAHORE: Prime Minister Raja Pervaiz Ashraf said on Tuesday that country’s progress and prosperity hinges on well-being of the business community and the government is making all-out efforts to ensure enabling environment for the trade and industry.

The Prime Minister said the PPP-led government was ready to implement all doable proposals on any sort of issue/project by the business community without any let and hindrance, because it believed in private sector’s growth.The government and the private sector were on the same page to rid the country of economic ills being faced today, he added.The Prime Minister said the government was working on a number of alternate energy resources including coal and solar power. He said the solar energy projects were not that inexpensive as being portrayed, however, with the passage of time the solar panels would be in easy access of the consumers.

Raja Pervaiz said that on the advice of Dr Samar Mubarik Mund, the government gave instant response to Thar Coal gasification, as a number of such projects was well underway.He, however, made it clear these projects entails a lot of many things including power generation stations and transmission lines for their connectivity with the national grid that would definitely take time to trickle its effects down to the common man.

The Prime Minister said the government was also focusing on the hydel component of the electricity and had expedited work on all ongoing hydel projects as well as those on the drawing board.    If all the federating units develop a consensus on Kala Bagh Dam today, the government would initiate construction of the dam immediately, he maintained.The Prime Minister said that it was not only Pakistan but many other countries including India, Middle East, Bangladesh, Bhutan and other SAARC countries were also facing the demand and supply issue of the electricity.

He also announced to take LCCI as member in the Energy Crisis Committee under his (Prime Minister) chairmanship.He said the government has also reset its priorities by laying greater focus on improving law and order situation, fulfill the gas and electricity requirements of the business and industry, equitable electricity load-shedding and promotion of private sector.

“We believe in our people, particularly the businessmen and industrialists that together we will steer the country out of prevailing challenges,” he added.With regard to trade with India, the Prime Minister said that government was committed to facilitate the business community, adding, the government was watching the entire development on the subject and the Pak business community’s interests would not be compromised.

Raja Pervez said the government, and industry and business community were not opponents but basically, “We are one, and our destination is only and only the development of Pakistan and well-being of her people. We have to promote this aspect that all institutions- Supreme Court, Armed Forces, Parliament, media and business community- are ours.”

The Prime Minister said that despite all odds, the PPP-led coalition government manage effectively to promote the democracy as well as implement 75 percent of its (PPP) manifesto by achieving fiscal target; bringing down the inflation rate to a single digit, while the GDP was also all around in agriculture and manufacturing sectors.

Earlier, highlighting the economic steps, the Federal Finance Minister Dr. Abdul Hafeez Sheikh said that despite being a political government, it had stabilized electricity tariff; deregulated the petroleum prices and rationalized the gas prices, besides, reducing the government expenditures up to 7 percent annually.

The federal government, he added, had strengthened the provinces by giving them fiscal and resources autonomy, and the provinces received Rs 5000 billion, while, an additional amount of Rs 1000 billion was also given to provinces under the changed National Finance Commission.Dr. Hafeez said the federal taxes showed up to Rs 350 billion more revenue collection during last fiscal year, adding, the national tax deficit could be eliminated with the cooperation of provincial governments.

Under the new tax reforms, he said, the federal government had abolished Regulatory Duty on 392 out of the total 397 items, while, Federal Excise Duty (FED) was either abolished or brought down to half on various items and the FED would completely be abolished within next two years.Similarly, he said, slabs in Custom Duty were also reduced, and 17 tax slabs had been reduced to mere seven slabs, while, the minimum amount for Income Tax had also been raised from Rs 100,000 to Rs.  400,000.

The Minister said that government had decreased the rate/ratio on all sorts of taxes that would ultimately prove to be beneficial for all Pakistanis.The PPP government, he said, had also the pride of completing 650 developmental projects worth Rs 3000 billion including energy projects. – Brecorder

Pakistan‚ Afghanistan agree to work together for peace in region: PM

Pakistan‚ Afghanistan agree to work together for peace in region: PM