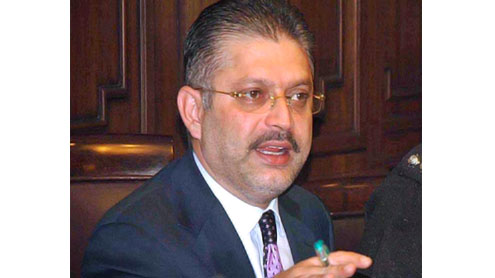 KARACHI: Sindh Government, has chalked out a comprehensive plan to maintain law and order especially in Karachi.

“Sindh Chief Minister Syed Qaim Ali Shah has made a security plan to improve the situation. He has a serious concern about law and order in Karachi, ” Sindh Information Minister Sharjeel Inam Memon said while briefing media on the law and order, and the Government actions taken for the security to life and property of the people.Additional Inspector General of Police, Iqbal Mehmood was also present.

The Minister said President Asif Ali Zardari was personally taking interest to ensure better law and order in Karachi.The President had issued directives to the Chief Minister in this regard, he said.He said Sindh Governor Dr. Ishratul Ebad Khan was also on board with the Government busy in controlling street crimes, terrorism and extremism in one shape or another.

The Minister informed that Pakistan People’s Party, Muttaheda Qaumi Movement (MQM) and Awami National Party (ANP) had reached an agreement to give a totally free hand to the law enforcing agencies in maintaining law and order in the province especially in Karachi.He said that there is no religious, linguistic or ethnic problem in Karachi but the conspiracies against the Government and the country by those forces/ elements who do not want to see Pakistan as progressive and prosperous country. These forces tried to start even linguistic clashes in the city.

Some outside forces did not tolerate Pakistan as atomic power and they tried de-stabilize Pakistan economically, he said.He rejected the impression that the human loss in Karachi was the target killing or religion based. Outside forces had intruded and their men were carrying attacks by adopting different shapes, he said.” By creating law and order problem in Karachi which is international hub of trade and industry, the hostile forces tried to damage our national economy and weaken Pakistan,” he remarked adding that we, as a nation, would have to fight against these conspiracies.

He especially appealed to the ulema to support the Government’s efforts for maintaining law and order in the country especially during the month of Muharram-ul-Harram.He underlined the need for tolerance and existence among different religious sects, communities and political parties/groups in the supreme interest of the nation and the country.The Sindh Information Minister argued that today a huge quantity of arms and ammunition was available in the city which was the gift to the nation from General Zia-ul-Haq.

” General Zia destroyed generations by promoting heroin and kilanshinkov culture,” he remarked.He said that it was very difficult for the government to clean the city dumped with arms and ammunition within a short period.However, he said, the PPP-led Government was making its best efforts to de-weaponize the city and control all kind of crime.He highlighted the Government’s efforts /decisions.

He praised the role played by the police and rangers in maintaining law and order in the city over last four and half years.He said no government would welcome a deterioration of law and order as security to life and property of the citizens is its prime duty.Mr Sharjeel said that certain forces were busy to create problems for the elected democratic government. – Brecorder