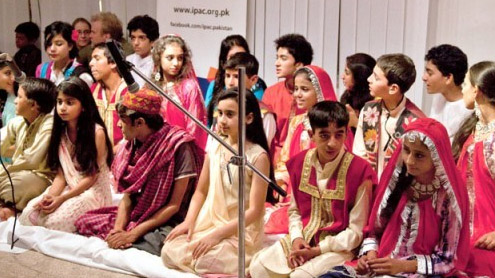 ISLAMABAD: An enriching evening of raw artistic expression proved to be somewhat of a genius prescription in removing some of the layers of what is a deep-rooted class struggle within Pakistan.

The Institute for the Preservation of Art and Culture (IPAC) invited 20 bright students from varying demographics to participate in an eight-day workshop that culminated in a vibrant showcase for family, friends and enthusiasts at Kuch Khaas this Monday. “The energy in this room tonight is just incredible,” expressed folk and sufi artist Arieb Azhar, in describing the organic unity within the confident young performers, who belted out popular folk tunes from the four provinces, including “Peeri Pavandi Saan”, “Laila O Laila” and “Balle Balle”. He admitted that their understanding of the 16-beat rhythm was innovative yet impressive at the same time.

The group, which was a cocktail of students from various schools such as Headstart, Khaldunia High School, Lahore Grammar School (LGS), Mashal Model School and Pehli Kiran School, sat up straight, eyes glinting and delivering notes in perfect harmony – it was impossible to tell them apart.  “This is a pilot initiative to remove barriers both within class and gender,” said Umair Jaffar, Director IPAC, adding that there wasn’t a more natural way to do it than through cultural enrichment as he pointed to both – the camaraderie of the students and equal representation of boys and girls.

Traditional folk dances Khattak (Khyber-Pakhtunkhwa), Saami (Punjab), Leva (Balochistan) and Jhoomar (Sindh) were performed in small groups, followed by the classical forms of Bharatanatym and Kathak, evoking the rich aspects of Pakistan’s cultural heritage that are disappearing fast in a time of rapid westernisation.  “Our rich heritage is no longer being passed on to our newer generation,” Ustad Mohammad Ajmal, who taught the group rhythm through his tabla and accompanied their performances, shared his disappointment about the lack of enthusiasm on the part of schools towards encouraging this craft. “Even the schools that have resources and have employed music teachers are encouraging western music.” As yet, there are no schools in Islamabad that offer tabla lessons, despite its precedence in all forms of classical music and dance.

Sharif Khan, a seventh-grader, giggled with his newly made friends after the performance, sharing that it was the first time he performed a traditional dance. It was liberating for the young student from the Mashal Model School in Bari Imam to meet dancers, singers, artists and other young students from different schools. For some, it was a dream come true to perform. Ghulam Abbas of the Pehli Kiran School may have lost his legs to a trying battle with polio but not his dreams. The 18-year-old who has given education a second chance at PK-2 wants to be a singer. His solo performance, though hesitant, conveyed his indignation. While the rest of the students took the final performance by their music teacher and artist Afi Bakshi as an opportunity to let loose on the floor to dance, Ghulam dragged himself to a corner preoccupied with containing the rush of excitement and fulfillment he felt.

“We just went in the back and cried a little,” shared 13-year-old Anum Haroon Pasha who is a student at Khaldunia High School.  “We will really miss all the friends we have made here.”  Though the workshop is over to the dismay of all its participants, the evening proved to be a liberating exposure for all the schools involved. One can only hope that not only do these bonds sustain but that these children become champions for the preservation of our thriving cultural heritage in their own capacity. The workshop was funded by Kathryn Davis as part of her endeavour “projects for peace”. -Tribune

Tags: Art and Cultureartistic expressioninstitute for the preservation
Previous Post