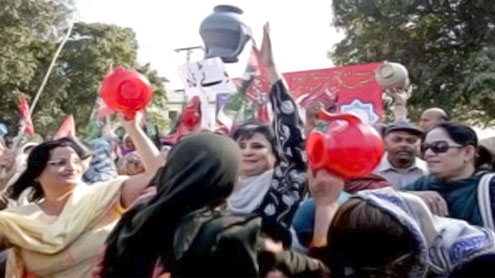 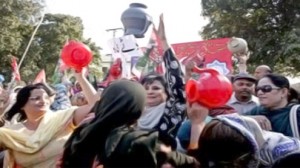 LAHORE: An unannounced united opposition of the Pakistan People’s Party (PPP) and Pakistan Muslim League-Quaid (PML-Q) in the Punjab Assembly on the second day of the ongoing session succeeded in preventing the treasury benches from taking up official business in the House. They also staged a strong protest against “turncoat politics” outside the assembly building on Monday.PA proceedings, on the second day of its 23rd session, started 46 minutes late from its scheduled time of 3pm under the chairmanship of Speaker Rana Muhammad Iqbal. After recitation from the holy Quran, the House offered fateha for the late Khalid Javed Ghurki and former MPA Iqbal Shah on a request of opposition leader Raja Riaz. The House also paid rich tributes to the assassinated Federal Minorities Affairs Minister, Shahbaz Bhatti.

During his two-hours-long speech, Raja Riaz said that the Punjab chief minister’s secretary, Dr Tauqeer, was running the provincial government’s affairs and none of the ministers had any worth before him. “Gone are the days when Tauqeer used to humiliate MPAs,” he said. “You will be taken to task and held accountable for all your illegitimate actions,” said Riaz as he asked Dr Tauqeer to mend his ways.He threatened that if the PML-N government did not release development funds for uplift schemes to PPP MPAs by Thursday, there would be a “dama dam mast qalandar”-like situation in the House during its Friday’s sitting. He told the House that the funds allocated for ongoing development schemes were frozen immediately after the ouster of the PPP ministers from the Punjab government. “But, the PPP is not a weak political force. It knows how to get its due share,” he asserted.

Informing the House that the funds which had been stopped were being spent on construction of a girls’ school, Riaz alleged that “Shahbaz Sharif has deprived girls due to his stubborn and adamant-type personality”. He asked him (Shahbaz) to stop taking advices from Dr Tauqeer.The opposition leader reminded the House that he had, on Friday, asked the chief minister to do attend the proceedings from now onwards. But, he added, “Shahbaz has replied that he is not answerable to anyone.” He criticised the chief minister and said he should read the constitution.“I have been with the government for the last three years. And with firm belief, I daresay I have not seen such a proud man like Shahbaz Sharif, who even does not like to shake hands with MPAs.” “What is he proud of when he has badly failed to deliver to the masses,” Riaz questioned.The opposition leader called for a reelection, saying that at the time when Shahbaz was elected from Rawalpindi seat his earlier victory from Bhakhar existed nowhere. “Perhaps this is the reason for which he has given the charge to Tauqeer,” he suspected.

Riaz also came down hard on PML-N senior leader Chaudhary Nisar Ali Khan and called him “General Nisar”. “It seems Nisar is eying premiership with a view that this time when the PML-N leadership goes to Jeddah he may get a chance for this.” The PPP, he said, would not let it happen. Riaz declared that the government would not be able run official business of the assembly until his party was interested in it.Earlier, legislators from across the political divide, mainly from the minorities, paid rich tributes to Shahbaz Bhatti as a loyal political leader and a man of principles.The MPAs, while saying that Bhatti worked for the rights of oppressed and portrayed a soft image of Pakistan, deplored that his voice had been silenced by anti-democratic forces.In their speeches, minority MNAs congratulated the Punjab Assembly for giving some time to applaud services of the slain minister. They reminded the House that Quaid-e-Azam Muhammad Ali Jinnah had, in his address to the Constituent Assembly on August 11, 1947, pledged equal rights to minorities.

The parliamentarians, including Kamran Michael, Tahir Sindhu, Najmi Saleem, Joel Amir Sahotra, Pervez Rafiq, Rana Afzal, Neelam Jabbar and Khawaja Islam, also spoke on the occasion and paid tributes to Bhatti for his services for the nation and his community.MPA Pervez Rafiq read out the text of Quaid-e-Azam’s speech on August 11, 1947, that “minorities to whichever community they may belong would be safeguarded. Their religion or faith or belief would be secured. There would be no interference of any kind with their freedom of worship”.Rafiq also made it clear that Bhatti was not against the 295-C but against its misuse. He said that Bhatti had consulted different religious scholars before taking a stance on the matter. He deplored that a country where the murderer of Punjab governor Salmaan Taseer had been garlanded by lawyers and religious extremists, the lives of minorities would remain insecure.Raja Riaz was still continuing with his address when the House was adjourned over a mishap in which a cameraman of a private TV channel, Fiaz Umar, received a stray bullet on the PA premises – Dailytimes