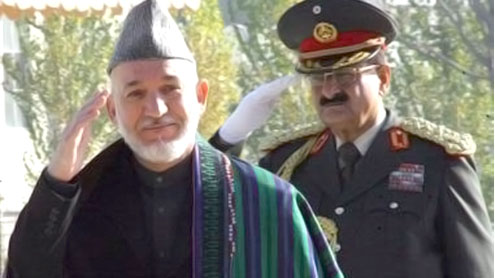 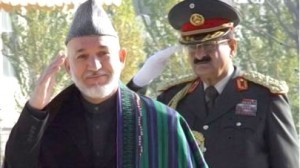 AFGHAN President Hamid Karzai, who owes Pakistan the hospitality of hosting him when the chips were down, now, has asked the allied troops to target Pakistan and leave Afghanistan alone. Mr. Karzai says international troops should leave Afghanistan and take their fight against terrorism across the border into Pakistan. Mr. Karzai delivered his latest criticism of NATO efforts over the weekend in Asadabad, capital of eastern Kunar province, where he was visiting relatives of civilians killed in a raid by international forces. The Afghan leader said his government has shown NATO that the terrorists and militants are not in Afghanistan, but instead are hiding in neighbouring Pakistan. Even if Mr. Karzai was playing to the gallery, he should not have been so brutal and vile towards his eastern neighbour Pakistan, which bore the brunt of the Soviet invasion and besides hosting millions of Afghan refugees including Mr. Karzai for over a decade, supported operations to oust the Soviets. After 9/11 too Pakistan supported the US-led coalition, which defeated the Taliban and helped install the Karzai regime.

Civilian casualties are a sensitive subject on both sides of the Durand Line. Earlier this month, NATO’s top commander in Afghanistan, General David Petraeus, apologized for an airstrike that killed nine children in Kunar province – the result of miscommunication, according to the coalition. Mr. Karzai has warned that NATO could face “huge problems” if the accidental killing of civilians does not stop. A joint report last week by the U.N. mission in Afghanistan and the Afghanistan Independent Human Rights Commission says there were nearly 3,000 war-related civilian deaths in 2010 – an increase of 15 percent over 2009’s toll. The study concluded that insurgents and militants were responsible for about 75 percent of those deaths. The collateral damage owing to drone attacks in Pakistan, has led tempers to soar. However, for a US pawn like Hamid Karzai to ask NATO and other allied forces to deflect the attack towards Pakistan is extremely heartless. Mr. Karzai may have become overwhelmed by emotions after watching a child having had its limbs severed as a result of NATO’s brutal attacks on civilian population but to wish the same fate on its ally and well wisher, Pakistan is a reprehensible act and cannot be condoned. Mr. Karzai appears to have lost all sense of reason and his judgment has apparently fled to brutish beasts for him to parrot his master that Pakistan is harbouring Al-Qaeda terrorists, who frequent attacks on NATO and US troops from their sanctuaries in Pakistan.

If Mr. Karzai is a visionary and a statesman, he pretends to be, he would be urging his masters not to ‘take the fight to Pakistan’. The coalition forces will depart one day then Mr. Karzai will be left to contend with Pakistan and why does he want to turn a friend and ally into a hostile neighbour, who is here to stay. Moreover, if Mr. Karzai thinks that by ‘taking the fight to Pakistan’, Afghanistan will be spared; he is sadly making a mistake. Terrorists and extremists know no religion or territorial boundaries. Afghanistan will burn in the same fire as Pakistan as today Pakistan is suffering and bearing the brunt of suicide bombers and terrorist attacks because of helping Afghanistan.There is a word of caution here for the US too. Former President Bush’s impulsive action of attacking Afghanistan, without considering the consequences or even paying heed to the lessons from history is causing the US, once the sole superpower the ignominy of defeat. President Obama, too, relying overly on his trigger happy war horses like General Petraeus is going to cost him dearly. There is a time for action and there is a time for talk. Petraeus wants to negotiate from a position of strength but now it may be too late. The US has to cut its losses and withdraw, before there is total defeat. Let the Afghan-led reconciliation proceed with Pakistan’s help and stop considering “taking the fight to Pakistan – Dailymailnews