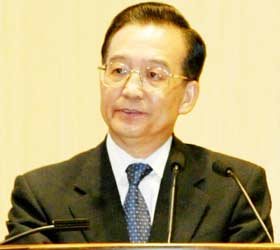 Chinese Premier Wen Jiabao on Saturday said Pakistani investors were welcome to start joint ventures in China and the latest close interaction between the entrepreneurs of the two countries would provide them linkages to utilise in future.Addressing the Pak-China business summit here, he said the increasing economic cooperation between Pakistan and China will bring tangible benefits to the people of two countries.He said Pakistan and China had trade of $ one billion in 2002 which rose to $ 6.8 billion in 2009.He expressed the desire to expand trade volume between the two countries to $ 10 billion as soon as possible.

One tenth of Pakistan’s overall trade is with China and there is a need to search more avenues of collaboration to give further impetus to commercial links, he remarked.
Wen expressed satisfaction that despite the financial crisis faced by the world the Sino-Pak trade was not affected.
He said he came to know about concerns in Pakistan about tilting of balance of trade towards China.
The Chinese Premier assured of measures to adjust the trade balance and said free trade agreement between the two neighours had created new commercial opportunities and improved the business environment.
He referred to the investment of billions of dollars brought to Pakistan by Chinese companies.
The Chinese Premier was optimistic that the recent signing of bilateral agreements and memoranda of understanding with Pakistan would promote economic and trade ties.
He said both countries are good friendly neighbours and their cooperative partnership would expand in the times to come.
Wen said China has pledged to provide $247 million to Pakistan for assistance of flood victims. A portion of the amount is already given for relief and rescue efforts while remaining aid would be used in the reconstruction phase.
He conveyed the concerns of people and government of China over the tragedy of floods and said China would do whatever it can to help their brothers in Pakistan. – App