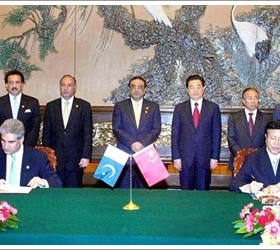 Prime Minister Syed Yusuf Raza Gilani has called upon entrepreneurs from China and Pakistan to take advantage of natural economic commonalities that exist between the two countries and make economic and trade partnership a driver for common development and shared prosperity.Addressing Pakistan China Business Cooperation Summit here on Saturday, he said China has always been a generous and reliable partner in Pakistan’s development efforts.Prime Minister Gilani and Chinese Premier Wen Jiabao presided over the summit attended by leading businessmen of Pakistan and China.

Monumental projects such as the Karakorum Highway, Chashma Power Plants, Heavy Mechanical and Electrical Complexes, Gwadar Deep Seaport are all examples of the outstanding cooperation between the two countries, Gilani mentioned.
He expressed the hope that Chinese entrepreneurs will foster close partnerships with Pakistanis.
“Pakistan have much to learn from you. The people of Pakistan draw strength from you and rejoice over the great accomplishments of the Chinese nation,” he remarked.
Pakistan wishes to forge even closer economic links with China, he said adding the corporate and business sectors of both countries must seize opportunities and take the lead in creating win-win scenarios.
Located in the heart of Asia, he said, Pakistan can act as a conduit connecting Western China to the Arabian Sea, South Asia and West Asia. Pakistan is in the process of creating a National Trade Corridor connecting the north and south of the country.
“This corridor will connect to China through the Karakorum highway, which is being upgraded. Besides the comprehensive Free Trade Agreement and the Joint Five Year Economic Programme, we are now jointly endeavoring to establish closer financial and banking sector cooperation,” he added.
He said both countries are working on creating trans-border economic zones and towards integrated border management.
“Pakistan is rich in resources. We have abundant talent and natural resources. We have requisite business and technological excellence,” he said adding the Pakistan government has announced special economic incentives for Chinese investors including duty free import of plant and machinery and exemption from sales tax and income tax.
The Pakistan China Joint Investment Company (JIC) the first such company established by China outside the mainland, is operational in Pakistan, while the Industrial and Commercial Bank  of  China (ICBC), the biggest bank in China and internationally is all set to launch its operations in Pakistan, the Prime Minister told.
The Prime Minister was hopeful that these institutions would act as a financial bridge for Chinese investors and businessmen coming to Pakistan and would play a lead role in launching economic projects.
“China today, is not only one of the largest recipients of foreign direct investment, but now with its huge reserves is also investing in other countries. China follows the Chinese adage:
“Prosper thy neighbour,” he added.
Gilani said Pakistan, with a thriving economy and with political opinion of all shades supporting friendship with China, is a very advantageous location for outbound Chinese investment.
“It offers not only high returns to Chinese investors but also the comfort of strong political support,” he added.
The Prime Minister said Pakistan’s enormous growth potential is generating huge energy requirements.
“Our energy requirements are expected to increase from the present 20,000 megawatts to more than 160,000 megawatts by the year 2030. Capacity will be added to all power sectors including hydel, coal, nuclear, renewable, gas and oil power generation.”
Pakistan has 185 billion tons of coal reserves, he said adding, “We will convert this resource into energy to satisfy Pakistan’s growing demand. We would encourage Chinese companies to consider investments in the energy sector, which assures certain returns. Hydro©power, dams, agriculture, manufacturing sectors together with building of infrastructure including road and rail networks as well as airports, seaports and other facilities present limitless opportunities of close collaboration.
He said there exists significant opening in a number of sectors of Pakistani economy.
“We have proven deposits of coal, copper, chromite, limestone and gemstones. Opportunities also exist in oil and gas exploration.  Pakistan’s steel and cement industry is witnessing a boom.”
There is a huge demand for housing, which will not only require further investments in the cement and steel industry, but also other related industries.  Investors in the housing sector are therefore assured to get record profits, he observed.
Gilani said, “We have the fastest growing IT and telecommunication sectors fuelled by massive unmet demand.  Investments in the capital markets offer security and high returns.”
Despite the recent turmoil in the world stock markets, the Pakistani capital markets continue to show strong growth, reflecting Pakistan’s strong economic fundamentals, he noted.
He said Pakistan appreciates the presence of around 130 Chinese companies working in Pakistan that employ 13,000 Chinese nationals in their projects in Pakistan.
He said he would like to see this number grow significantly and assured that the government attached highest importance to the safety and security of Chinese personnel and premises in Pakistan.
The Prime Minister thanked China Council for Promotion of International Trade (CCPIT), Federation of Pakistan Chambers of Commerce and Industry (FPCCI), Trade Development Authority of Pakistan (TDAP) and Board of Investment (BOI) for arranging the business summit. – App