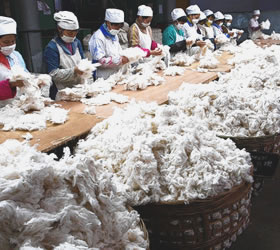 KARACHI: Prices fell modestly on the local cotton market on Saturday as mills kept on the sidelines in expectations of further decline in the rates, dealers said. The Karachi Cotton Association (KCA) left the spot rate unchanged at Rs 8,500, as a result, seeds cotton prices in Sindh and Punjab slid with modest fall by Rs 200-100 to Rs 3,500-3,900, they said.In ready business activity was down as about 11,000 bales changed hands at Rs 8,100-9000, they added. The mills, who were busy in forward buying during the last sessions, now kept on the sidelines on expectations of more decline in the rates, analysts said.They said that during the last several sessions, the mills continued forward buying of cotton to build-up long position despite the higher rates, even some of them were ready to pay higher rates for the fine types. But, falling trend in the NY cotton market, propelled them (mills) to wait for new development in the next week, they said.

In the meantime the ginners, however were looking a little bit confused under the circumstances, may they also get some leads in the coming week, they observed. On Friday the US cotton futures finished down four percent, falling by their daily limit intraday and bouncing like a yo-yo in sideways dealings after dropping more than 25 percent from a record high hit two weeks ago.The benchmark contract closed the week down 9.2 percent, the biggest weekly loss for the second-position contract since February 2009. March cotton futures made the biggest losses for the day on the 19-commodity Reuters-Jefferies CRB index, just one session after being the biggest gainers. They were the biggest losers on the index the day before that.Volume was thin, however, in a slightly abbreviated session following the US Thanksgiving holiday on Thursday. The benchmark March cotton contract on ICE Futures US closed down 4.83 cents, or 4.1 percent, at $1.1176 per lb, slightly paring losses after falling by the daily limit of five cents to a session low at $1.1159.

THE RUPEE: dollar may cross 86 mark