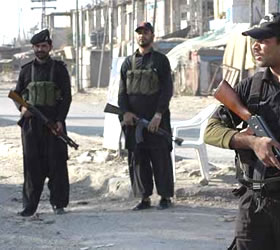 PESHAWAR: Security forces killed two terrorists in clashes in Swat district, tehsil Matta on Tuesday. The security personnel signaled the terrorists to stop after seeing suspected movement in the area but they started firing on the forces resultantly one soldier was injured. In retaliation, forces shot dead two of them. Three main tribes of Matta tehsil have announced to support the security forces against the terrorists in their area – Dailytimes

Explosion on railway track in Nawabshah

Explosion on railway track in Nawabshah