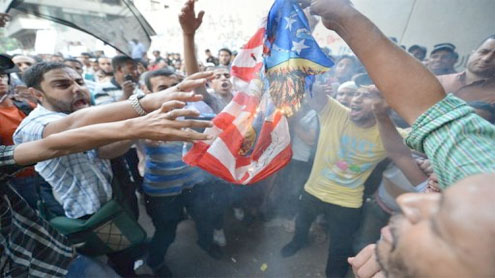 Protests and demonstrations against US

Protests and demonstrations against US embassies and diplomatic missions continue to roil round the Muslim world against the insulting film on the Prophet (PBUH).

The most violent protest was held in the Yemen capital Sana, where daylong clashes before the US embassy between police and protestors yielded four protestors dead and 34 wounded by police firing. Similar, though less bloody protests erupted in Cairo and other Arab capitals. In Pakistan, at the time of writing these lines, protests were expected on the call of religious parties and groups after the Friday prayers.

The National Assembly unanimously adopted a condemnatory resolution. Security for US diplomatic missions in Pakistan and across the globe was tightened to prevent any untoward incident, with the memory of the Benghazi attack and the slaying of the US ambassador and diplomats fresh in memory.

The Pakistan Telecommunication Authority proactively blocked all access to the offending film and its trailer on the internet. Reactions in other parts of the world varied, with Russia showing signs of sympathy for the US, while Chinese media blamed the US’s hegemonic designs in the Middle East as responsible for the US’s woes.

Pastor Terry Jones, the notorious American Quran burner, who has been promoting the offending film, received a call from US military chief General Dempsey to desist from such actions as they could endanger US soldiers’ lives in Afghanistan and Americans generally all over the world. The pastor remained non-committal, however.

The Obama administration’s response presents an interesting case study in the pressures the US president faces in such a situation in the run up to the presidential elections later this year. On the one hand, President Obama vowed to bring the Benghazi attackers to justice, backing up his claim with the despatch to Libyan waters of two warships armed with cruise missiles and a contingent of marines.

Obama also spoke to various Muslim leaders, including Afghanistan’s President Hamid Karzai. The thrust of his message was the protection of US embassies and lives. Obama’s rival in the presidential race, Republican Mitt Romney, as expected, did not spare the president criticism for his handling of the crisis, suggesting he was too soft.

Unfortunately, with one eye on domestic politics, President Obama expressed his determination to revenge the US deaths in Benghazi, but had nothing to say on the provocateur who set off this storm on the sensitive anniversary of 9/11. His administration, through Secretary of State Hillary Clinton, did little except to distance the US government from this “disgusting and reprehensible” film.

The fig leaf of freedom of expression behind which such provocateurs and mischief makers have hidden, unfortunately backed by their governments in the west, is wearing extremely thin. If the US and the west have any notion of where their interests lie in the Muslim world and beyond, they would take action against the perpetrators of such mischief, charging them with culpability in the killing of the US diplomats in Benghazi. That may remain only a fond hope, however.

The fruits of the Arab Spring have been contradictory, to say the least. Well organised, struggle-hardened old religious parties like the Muslim Brotherhood have emerged the real beneficiaries of the movements against long entrenched dictators and for democracy. Ironically, in Libya, Syria, and elsewhere in the Middle East, it is by now clear that the US, in its zeal to topple regimes it does not like, is in bed, consciously or inadvertently, with al Qaeda and its affiliates. So much for the war on terror.

As long as the west continues to protect mischief makers bent upon insulting Islam and wounding the deeply held religious sentiments of the Muslim world, they will find it hard going in what is still perhaps the most strategic region of the globe. In their own interests, the US and the west must clamp down on such provocateurs before their nefarious and deliberate activities spark off a conflagration that could shake the world. – Dailytimes