by ToP
in Featured, Music
0 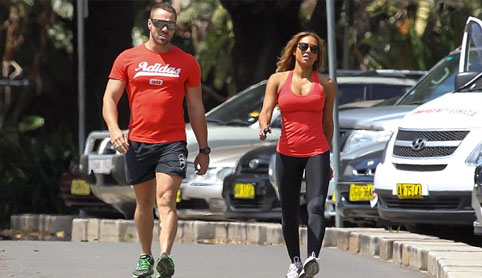 They have been married for five years, and it seems the spice is still very much alive for Mel B and Stephen Belafonte.

The singer, 37,  enjoyed a tough fitness session with a buffed up personal instructor on Wednesday – and then showed off the results to her husband later that evening.Earlier in the day, the Spice Girl stepped out in her gym gear in the searing Sydney heat.Wearing a rather striking bright red top, she was joined on her walk by bulky instructor Cameron Byrne – who was also wearing a tight red T-shirt.Despite the possibility of a gruelling workout, Mel B couldn’t have been any happier.

Wearing her sunglasses, she smiled throughout the stroll, and at one point she seemed to be in fits of laughter at a joke by her instructor.They headed to Centennial Park for the fitness session, and we’re sure the laughing soon stopped.She did allow herself a breather however, and was pictured on the phone at one point.It obviously didn’t tire her out completely – as later that day she headed out on a date with her husband.The loved up pair headed out to Cantonese restaurant Fei Jai.

Mel B dressed casually, wearing a black zipper top and leggings – while her husband wore a black leather jacket.Let’s hope she didn’t enjoy herself too much.She revealed on Twitter that she was flying out to Melbourne early the next morning. – Dailymail

Tags: Mel BMel B spices up her lifeSpice Girl