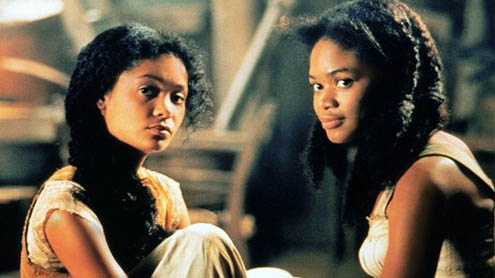 Thandie Newton has told how she was abused as a teenage actress on a casting couch.

The 40-year-old British star said she was still scarred by a ‘horrific’ incident involving an unnamed male director when she was 18 and looking for her ‘big break’.Miss Newton, now a mother of two and married to the film producer Oliver Parker, said she later found out the director involved had shown a video of her ordeal to others in showbusiness.The Cambridge-educated actress, who has starred in films including Crash and Mission: Impossible II, has chosen to speak out about her abuse as part of an international campaign to end violence against women, One Billion Rising – the number who have been raped, beaten or abused.

Speaking to CNN International journalist Max Foster, she said: ‘When I was a 16 year old fresh from boarding school going out in, you know the casting couch, I was definitely objectified to an extreme.’The way I was made to feel. The way I was exploited and the kind of role and the kinds of things I was expected to do in auditions.’Foster asked: ‘So you were abused as a 16-year-old?’ Miss Newton replied: ‘Yes.’She goes on to explain, however, that at the time she didn’t know how to react because it was conducted in what she describes as a ‘professional environment’.Referring to the incident that happened when she was 18, she continued: ‘It was a screen test.

‘There were two other people in the room – the director and the casting director, who was a woman.‘The director asked me to sit with my legs apart – the camera was positioned where it could see up my skirt – to put my leg over the arm of the chair.‘Before I started my dialogue, [I was told to] think about the character I was supposed to be having the dialogue with and how it felt to be made love to by this person.’She was confused because it was a ‘professional environment’.‘I was thinking “this is so strange, why would I need to do that?”’ she said. ‘But this is the director, there is the casting director, [it] must be normal.

‘I’m 18 years old, you know, and I’m thinking this is, obviously… I was in a protected… there were boundaries.’Three years later, she discovered the video was being shown by the director to other showbusiness figures.‘It turned out the director… used to show that video late at night to interested parties at his house – a video of me touching myself with a camera up my skirt,’ she said.Miss Newton declined to name the director or say if she knew whether he was still in the business.

Now married to producer Oliver Parker, she said the coupl were accosted by a drunken British producer at a party in Cannes several years later who boasted of having been shown a video of her ordeal.The actress was born in London to a Zimbabwean health care worker and her British husband and grew up in Cornwall. Her name means ‘beloved’ in Zulu.She married English writer and director Oliver Parker in 1998. The couple have two daughters: Ripley, 12, and eight-year-old Nico. – DailyMail