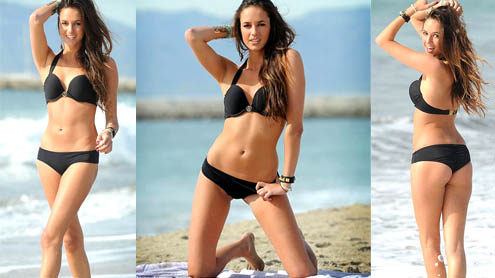 As she poses in her black bikini, it’s easy to see how Sarah Herndon won the heart of Michael Phelps.

And now the 22-year-old waitress has opened up about her romance with the swimmer in a revealing new interview.She said of her gold medallist beau: ‘Michael’s a good kisser. He’s very cuddly and kissy, which is cute. He’s charming and a gentleman.‘He’s got like a confident side to him to that makes you want more. But he’s very sweet at the same time.’She added: ‘Michael’s body is obviously great, I mean he’s an athlete.’He’s got a great sculpted body. He’s obviously been a swimmer like forever.

‘There’s not really much bad you can say about it.’Sarah was whisked to the Bahamas by the smitten star for a romantic five-day break of fishing, snorkelling and tropical sunsets.Things got steamy between Michael and Sarah on the trip and she reportedly told pals how he was an ‘amazing lover’.But the loyal brunette blushed when the conversation turned to sex – insisting their bedroom antics will remain ‘private’.‘What happens between me and Michael intimately is our business. And not something I care to talk about with anyone else besides us.‘I did stay in his room but I’m not going to say that he’s a good lover or anything. I would never talk about something like that.

‘Michael is a very affectionate, sweet guy, that’s all I’m going to say.  I’m really happy to have got to know him on a more personal level’, she said.Describing the moment they fell for each other on a lobster fishing expedition off a remote Bahamas island, Sarah said: ‘It was sunset and the water was so teal and clear – really beautiful.‘We were holding hands and he was putting his arm around me when I was cold, he’s really caring and affectionate. He would kiss me in front of his friends – you could tell he was happy to have me there. He was treating me like I was his girl.’

The pair went on a lobster fishing trip to catch their dinner, where Michael won Sarah over by jokingly telling the crustaceans ‘you know I live in the water too!’Sarah met the Olympic hero just before Christmas while on a family holiday to Cabo San Lucas, Mexico.While out clubbing with her three sisters (twins Rachel and Rebecca, 18, and Krista, 19), the girls were handpicked by workers to come and sit at Michael’s table.Sarah said: ‘Me and all my sisters were dancing on the bar. A worker came up to us and wanted us to go and hang out at his table, he said “Michael Phelps is coming, I want you there”.’

Sarah had split with her boyfriend of 15 months at the beginning of December while Michael had recently dumped his ex-girlfriend Megan Rossee.Sarah said: ‘We danced but we were just more talking. There was definitely an attraction but nothing really happened that night. We both talked about how we were both recently single. He didn’t say a lot. He just said it didn’t work out (with Megan), it didn’t sound to fun, I think that’s just what happens when you break up with people.‘When we left he asked for my number. And he ended up getting in touch with me the next day.’

Michael invited Sarah to a friend’s party, and after that asked her to stay an extra day on holiday with him, which she happily did after getting the green light from her fire captain father.The following day Sarah joined Michael while he played golf, with the pair then spending the night together for the first time.It was the beginning of a whirlwind romance – after going their separate ways, Michael invited his new squeeze to the Bahamas in early January and paid for her flight.Michael was so taken by Sarah when the holiday finished he invited her to fly back to Baltimore with him for a date night.

She said: ‘He invited me to go on the private jet with him to Baltimore. It was awesome. He threw me over his shoulder as we went to go on the plane. He showed me around a little bit and then we went for sushi and saw the movie, Zero Dark Thirty.‘It was romantic, he’s a great date. He’s a gentleman, very polite. I’m sure he gets that from his mother – they’re pretty close.’Michael invited Sarah to watch his team the Baltimore Ravens in the Super Bowl but she declined because she had prior arrangements with friends. – DailyMail