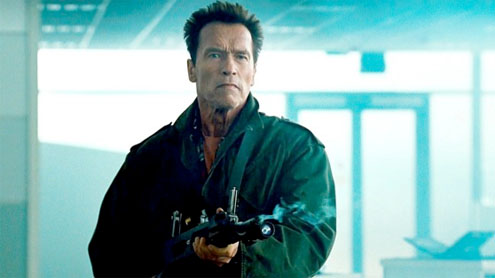 LOS ANGELES: Arnold Schwarzenegger will star in the action thriller “Ten.”The film, which is being distributed by Open Road Films, will be directed by “Training Day,” “S.W.A.T.” and “U-571” writer David Ayer.

The film will follow an elite but crooked DEA task force that battles the world’s deadliest drug cartels, when they’re not busy stealing millions of dollars. The team thinks its thievery is a well-kept secret, until someone begins bumping them off one by one.”X-Men Origins: Wolverine” and “A Good Day to Die Hard” writer Skip Woods penned the original screenplay.Bill Block, Paul Hanson, Joe Roth, Palak Patel and Al Ruddy will produce, with Alex Ott of Ayer’s Crave Films serving as executive producer. QED International is financing the project.

Ayer’s most recent directing project, “End of Watch” will be released by Open Road in September. Schwarzenegger, who’s currently filming the action flick “The Tomb,” also co-stars in the action sequel “The Expendables 2″ with Bruce Willis and Sylvester Stallone, among others.”I am really excited about this project and the team that’s come together,” Schwarzenegger said of the project. “David Ayer is incredibly talented and exactly what I want for a story this compelling.”Promising that “Ten” will provide “an amazing role for Arnold,” Ayer added, “Reality is the watchword of this project and an exciting cast is in the works.”

Ayer called Schwarzenegger “one of my longtime heroes.”Schwarzenegger’s signing on for “Ten,” along with “The Tomb” and “The Expendables 2,” marks an ongoing return to the big screen for the 64-year-old, after he embarked on a comeback that was nearly destroyed by personal scandal.In May 2011 the actor put all upcoming projects on hold after news broke that he had fathered an illegitimate child with he and then-wife Maria Shriver’s housekeeper, Mildred Baena.

(Shriver separated from Schwarzenegger, who had recently termed out as California’s governor, shortly before news of the affair broke.)However, in July 2011, Schwarzenegger resumed comeback plans with the Lionsgate action thriller “The Last Stand.” That film, which stars Schwarzenegger as a small-town sheriff, has wrapped production and is slated for a January 18, 2013 release. – Yahoonews

Cameron Munter, US ambassador to Pakistan, reportedly plans to step down

No Doubt to release first album in a decade in September

No Doubt to release first album in a decade in September