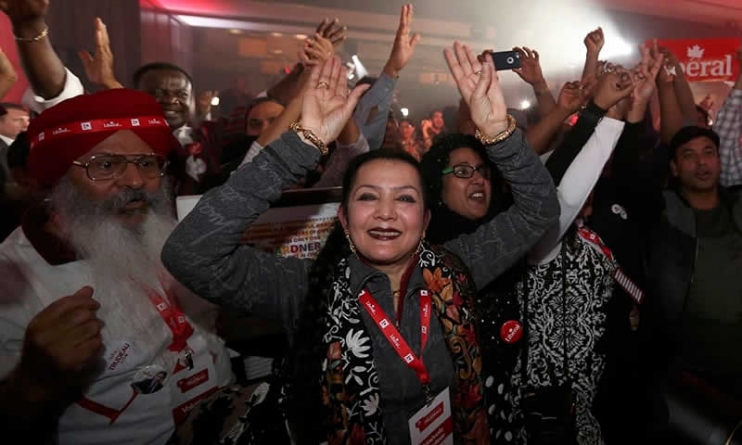 Canadians voted for a sharp change in their government Monday, resoundingly ending Conservative Stephen Harper’s attempt to shift the nation to the right and returning a legendary name for liberals, Trudeau, to the prime minister’s office.

Justin Trudeau, the son of late Prime Minister Pierre Trudeau, became Canada’s new prime minister after his Liberal Party won a majority of Parliament’s 338 seats. Trudeau’s Liberals had been favored to win the most seats, but few expected the final margin of victory.

Trudeau, tall and trim at 43, channels the star power — if not quite the political heft — of his father, who swept to power in 1968 on a wave of support dubbed “Trudeaumania.” Pierre Trudeau, who was prime minister until 1984 with a short interruption, remains one of the few Canadian politicians known in America, his charisma often drawing comparisons to John F. Kennedy. A bachelor when he became prime minister, he dated actresses Barbra Streisand and Kim Cattrall. Justin Trudeau, a former school teacher and member of Parliament since 2008, becomes the second youngest prime minister in Canadian history.

Trudeau, who has re-energised the Liberal Party since its devastating electoral losses four years ago, promises to raise taxes on the rich and run deficits for three years to boost government spending. His late father, who took office in 1968 and led Canada for most of the next 16 years, is a storied name in Canadian history, responsible for the country’s version of the bill of rights. “We have a chance to bring real change to Canada and bring an end to the Harper decade,” Trudeau said in Harper’s adopted home province of Alberta, traditionally a Conservative stronghold. Canada has shifted to the center-right under Harper, who has lowered sales and corporate taxes, avoided climate change legislation and clashed with the Obama administration over the Keystone XL pipeline.