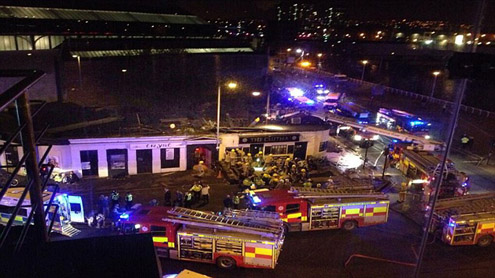 Three people are feared dead after a police helicopter crashed into the roof of an iconic pub in Glasgow city centre.

Dozens have been injured and emergency services had to dragg customers out of the premises after the aircraft fell from the sky ‘like a stone’. A police officer at the scene said there were a ‘few confirmed deaths’ but could not say how many. Staff at Glasgow Royal Infirmary say nine people from the scene are being treated at the hospital with some said to have ‘very serious injuries.’Eyewitness Fraser Gibson, 34, who was in the pub with his brother to see his former band, said: ‘Midway through their set it sounded like a giant explosion. The room was covered in dust. ‘We didn’t know what had happened. We froze for a second; there was panic and then people trying to get out the door.’ Another witness said: ‘It was total bedlam.’

The aircraft, which is said to have had two police officers and a civilian pilot on board, hit The Clutha on Stockwell Street, which faces the river Clyde. Witnesses said bystanders did not flee the scene and rushed to help by creating a human chain to lift the wounded from the pub to safety.‘Nobody knows just how many people were in the pub at the time as there was a concert being held there.’ Scotland’s First Minister Alex Salmond said in a statement: ‘Our thoughts are with everyone involved with the incident in Glasgow,’ he said. ‘The emergency services were on the scene within minutes, the rescue efforts are still in full operation and the Scottish Government’s resilience operation is now mobilised.’ 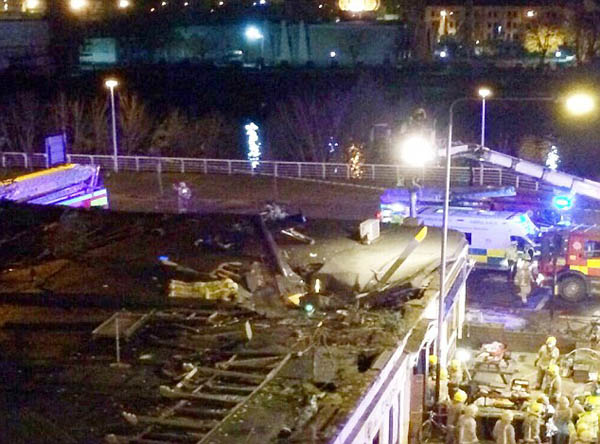 David Cameron and Ed Miliband have also taken to the social media site to express their concern for those caught up in the horrific incident. Reports say dozens of people have been taken to a nearby Holiday Inn for treatment. The emergency services have also been trying to get onto the roof to get access into the pub. Police Scotland have a helipad two miles west of the venue, suggesting the pilot of the helicopter may have been heading towards there. An eyewitness said the vehicle ‘dropped like a stone’ and another said the propellers appeared to have failed as it fell from the sky, Labour MP Jim Murphy, who was passing at the time and remained at the scene to help victims, said on Twitter:

‘Terrible here in Glasgow, helicopter crashed into roof of pub.’He also said there were ‘multiple injuries’ and people off the street had to help evacuate people. Mr Murphy, the former Scotland Secretary, told the BBC: ‘It’s a well established Glasgow pub. It’s a horrible horrible scene, but well done to the folk who were here. ‘Everyone formed a chain of people from inside the pub to outside, and the fire brigade and everyone were here very quickly.’ David Cameron said: ‘My thoughts are with everyone affected by the helicopter crash in Glasgow – and the emergency services working tonight.’The Police Roll of Honour Trust tweeted ‘Our thoughts are with the crew of @policescotland SP99 helicopter that has crashed in Glasgow – hoping everyone is alright. Ed Miliband wrote: ‘Shocking news from Glasgow, all my thoughts with people injured’. 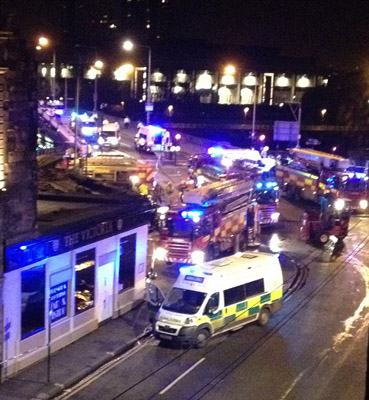 The band who were playing, Esperanza, posted on Facebook that the musicians were all safe and well, but that they did not know the extent of others’ injuries. Grace McClean, who was inside the pub at the time of the crash, told the BBC: ‘There was a ska band on in the pub at the back. It was fairly busy, we were having a nice time ‘There was a woosh noise and then there was a bang. There was what seemed like smoke, but the band carried on playing. ‘The whole pub just filled with dust, you couldn’t see anything and you couldn’t breathe. We managed to get outside, we found our friends, people were coming out in blood.’Claire Morris, who lives near the bar, told BBC News: ‘We heard this bang. We didn’t really know what had happened and then we heard people coming out and screaming. ‘I wasn’t sure whether there had been an explosion. My daughter said to me it was a helicopter that had hit the roof.

‘Police are everywhere. We are just very shaken.’ Another Twitter user said: ‘This is unbelievable. Just spent 20 minutes pulling people out the bar. Apparently a helicopter crashed on the roof.’ The Scottish Fire and Rescue Service initially said they were on their way to a ‘building explosion’ in Glasgow’s Clyde Street.A spokesman added: ‘I can confirm that we have people at the scene. ‘It is obviously a major incident. There are numerous fire engines there; 15 fire engines at the moment along with specialist services. I cannot confirm if there have been any injuries.’ Gordon Smart, a newspaper editor, told Sky News: ‘I was in a car park and looked up and saw a helicopter which I think was a police helicopter. ‘It was just such a surreal moment. 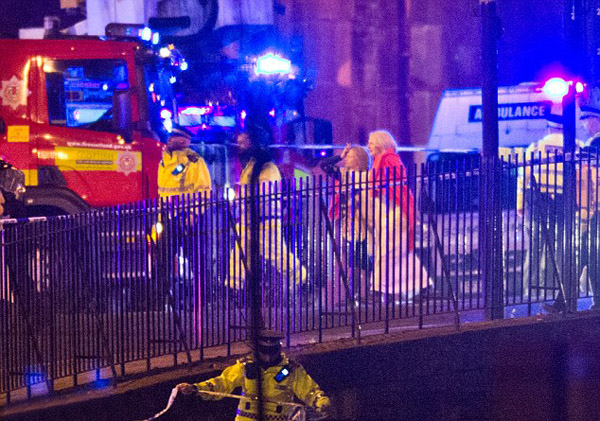 It looked like it was dropping from a great height at a great speed. I’m about 80% sure that it was a police helicopter. ‘There was no fire ball and I did not hear an explosion. It fell like a stone. The engine seemed to be spluttering.’ He added that it seemed the propellers of the helicopter were not working as it fell from the sky. Mr Murphy told BBC News: ‘I got out of my car and just tried to help people. ‘I saw a pile of people clammering out of the pub in the dust. No smoke, no fire, just a huge amount of dust.’

Deputy First Minister of Scotland Nicola Sturgeon tweeted: ‘Absolutely awful news about a helicopter crashing into the Clutha. All my thoughts are with everyone involved & the emergency services’. Many people took to social media to say they were proud to be from the city after hearing reports that many people had run to the pub to help the injured. Andy Dixon, an RAF technician, speculated that the pilot might have tried to land on the roof of the pub after the helicopter lost power. He told the BBC: ‘If the tail rota had failed it would have been a catastrophe.

There could have been a power failure, but it would have been coming down and in control. ‘It sounds like the pilot has come down at the roof and the rotar blades have spun down. At some point, the weight of the aircraft would have overcome the support of the roof.’ The crash comes more than 20 years after a police helicopter ploughed into a block of luxury flats in Eastwood Toll, Glasgow, resulting in one death. -Dailymail