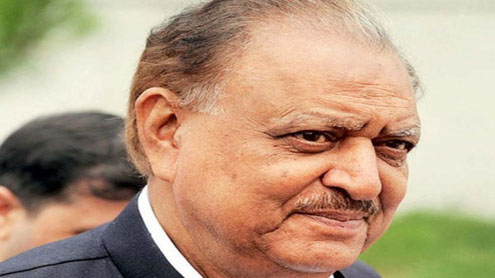 President Mamnoon Hussain has called upon all segments of society, including media, civil society, NGOs, and philanthropists to play their role in raising education and awareness about AIDS.

He also stressed upon a change in the mindset, which was indeed required; i.e. a shift from rejection of a patient to the rejection of the disease. The President, in a message on the World AIDS Day which is being observed on Sunday, emphasized upon increased awareness about HIV/AIDS and setting aside prejudices that came with the disease.

He said, “This day also provides an opportunity for people to show their support for those living with HIV and unite in the fight against AIDS.” The theme of the World Aids Day this year, “Shared Responsibility: Strengthening Results for an AIDS-Free Generation”, rightly emphasized the need to share responsibility and called for greater collaboration and integrated efforts on national and international levels, he noted.

The President said as HIV was an issue of global concern, it was important that the international community specially focuses on AIDS prevention and cure in the less developed countries and thereby help make Pakistan and the whole world HIV & AIDS free. The President also commended efforts of the Ministry of National Health Services, Regulation and Coordination, which has been making concerted endeavours through its National AIDS Control Programme to address various risk factors associated with this disease.

The promulgation of blood safety ordinance both at federal and provincial levels and supply of diagnostic kits and laboratory consumables and equipment to all provincial, AJK, FANA and federal centers were critical advances in fight against the disease, he added. -App