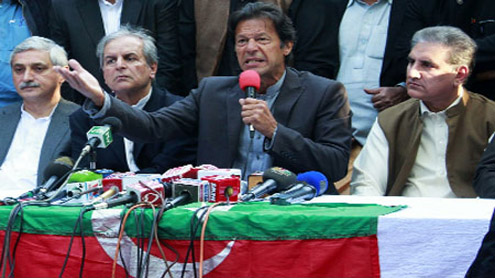 Pakistan Tehreek-e-Insaf (PTI) Chairman Imran Khan on Friday alleged that the Pakistan Muslim League-Nawaz (PML-N) came into power after striking a deal with the US.

While addressing newsmen, the PTI chief said that the PML-N government has introduced schemes for tax evaders. He said that black money” cannot bring peace in the country even if it is filtered through different schemes and added that his party will hold a protest against inflation and price hike on December 22. Imran remarked that the information minister is behaving like the US State Department’s spokesman.

He alleged that the PML-N government is playing a double game and does not even have any unanimous policy within the party. Talking about the NATO forces’ pullout from Afghanistan, Imran said that the US is not leaving Afghanistan even after the troops pullout. He said that country will run the UAV (unmanned aerial vehicle) programme for 10 years. The PTI leader emphasised that unless missile strikes come to an end, there cannot be any peace dialogue. He said that his party has blocked NATO supplies in accordance with the unanimous resolutions and as per the decision of the Peshawar High Court.

He said that they did not want a fight with the US, but only wanted to liberate this country (Pakistan) from “US slavery”. Commenting on the recent drone strike in North Waziristan, Imran Khan said that it has become obvious now that this war on terror is not our war. Meanwhile, PTI Central President Makhdoom Javed Hashmi has said that condemning drone strikes is not enough, and the government must take solid steps to stop these strikes, which are causing massive losses of lives and property while creating a sense of deprivation among the countrymen.

Talking to media persons, Hashmi said that the government should raise its voice for the arrest of the station chief of CIA in Pakistan who has key role in the conduct of drone strikes. He asserted that the “cowardly political leadership”, which lacks the ability and courage to take tough decisions in the larger interest of country and its people, has taken over the top slots.

The PTI president was of the view that by standing firm on its stance of stopping the NATO supply his party has shown power and courage to stand before the US administration over national issues. He vowed that PTI will not hesitate or avoid taking any decision for the sake of national sovereignty and integrity. -Dailytimes