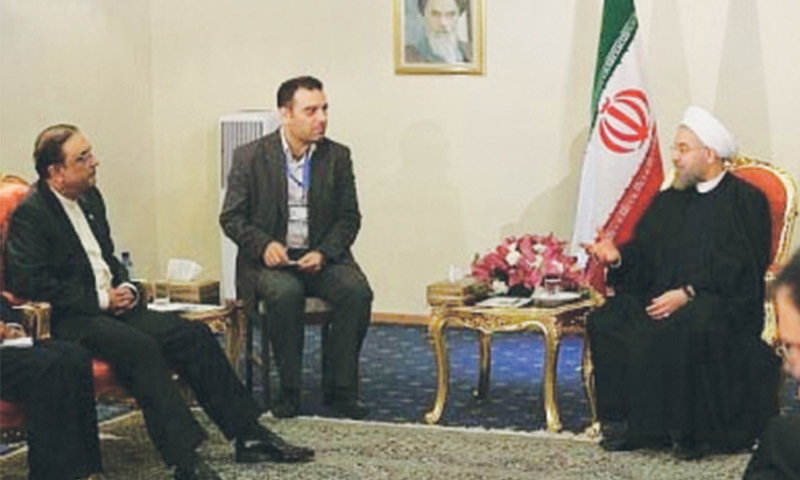 Former president Asif Ali Zardari said in Tehran on Tuesday that he was worried about the dangerous turn of events in the Middle East, North Africa and Euro-Asia because Pakistan had suffered a lot because of sustained blowback from extremism and terrorism.

According to a message received here from the Iranian capital, Mr Zardari said at a conference on militancy that lessons should be learnt from history to find the right paths in the tough times ahead. The conference presided over by Iranian President Hassan Rouhani was organised by the Institute of Political and International Studies. Mr Zardari said “state fragility” in the heart of the Middle East caused by non-state actors from across the world, including the West, was causing sleepless nights in many capitals. He said that as president of Pakistan he had resisted global attempts to rush into wars in the Middle East because any support to the rebel groups could lead to state meltdowns and dangerous security vacuums. He said that unlike its allies Pakistan did not vote at the United Nations for intervening in Syria mainly because “he had seen what chaos such choices had brought about in the past”.

“I did not want Pakistan standing on the wrong side of history again. Thirty years ago when a great game was being played between superpowers in our region, the international community and short-sighted policies joined hands to breathe oxygen into the monster of terrorism and extremism,” he remarked. Mr Zardari said conflict spilled over into Pakistan and the country had to reap a long harvest of violence. Terrorism and extremism were the main challenges in the ongoing millennium, he said, and war­ned against the sectarian hatred brewing in the Muslim world. He quoted from a speech made by Benazir Bhutto in which she had said: “This is the one where bigots feel that Sunnis must kill Shias and Shias must kill Sunnis, and that both must kill Hindus, Jews and Christians.” The former president said the big powers could afford to walk away from the mess but the countries in the region had no such luxury. “We have to make big-ticket changes in policy and correct our course.”

He said that course correction couldn’t come without the “price tag of blood” and recalled the great sacrifices Pakistan had made in the battle to wipe out terrorism and extremism. “I am encouraged that Pakistan’s determination to stand as a bulwark against terrorism is also reflected in the new Afghan president’s declaration that he wishes to forget the past and start afresh,” Mr Zardari said. “Sustainable peace in Pakistan is not possible without an Afghanistan that is politically stable,” he said and added that non-interference in Afghanistan would bear strategic dividends. “With India too… our policy of moving past coercive diplomacy is important.” Mr Zardari said there were no military solutions to inter-state conflicts in South Asia or even the world because the enemy had “mutated to a new kind of monster. It recruits lost souls and preys on the fearful and the misled for its violent march of death and plunder”.

The legitimate aspirations of the people should be addressed peacefully and in line with the sovereignty and territorial integrity of the countries involved, the former president said. “Some hard choices have to be made,” he said. “Peace in this region will continue to elude us until the legitimate aspirations of the people of Palestine and Kashmir are met.”

Turning to economic issues, Mr Zardari said: “Hydel-power diplomacy, the politics of pipelines, regional connectivity — all these will mean little if we are not able to connect to each other. The more we communicate and cooperate, the more we can share responsibilities as well as positive outcomes. “Tapi, Casa and IP pipelines are the kinds of motors we need for growth and for provision of jobs in a marketplace where extremism thrives in the soil of multiple deprivations,” he said.

Govt Should Quit if Unable to Maintain Peace: LHC