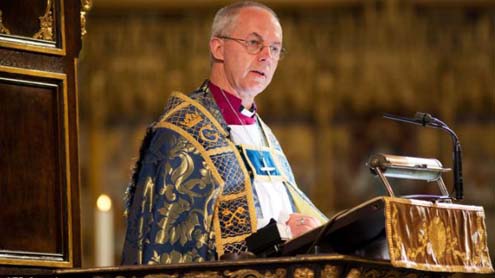 The Archbishop of Canterbury has risked inflaming the debate over Scottish independence by saying the English have mistreated the Scots for centuries.

The Most Reverend Justin Welby painted Scotland as a victim of English oppression and claimed Scottish people were reluctant to work alongside their southern neighbours. While his remarks appear to have been intended as a light-hearted aside, they run the risk of being seized upon by nationalists in the run-up to the independence referendum in September next year. Mr Welby was speaking in Iceland about his scheme to challenge payday loan companies with low-interest, co-operative credit unions. ‘It is such a powerful movement that we are even working with the Scots about it,’ he told a cathedral congregation in Reykjavik. ‘And there is a miracle.

It takes a lot to make the Scots willing to work with the English. Understandably…we have spent about 800 years ill-treating them.’ The suggestion by a figure at the heart of the English establishment that Scots are victims could be ripe for exploitation. Disputed or glamorised portrayals of historic events and figures, from William Wallace, the battles of Flodden Field and Culloden to Mrs Thatcher’s poll tax, have played a major role in the growth of nationalism in Scotland over the past two decades. The 13th century figure of Wallace was mythologised into a nationalist hero by the 1990s Hollywood film Braveheart.

Mr Welby’s sermon comes at a time when some pro-independence leaders are stepping up their anti-English rhetoric as a referendum tactic. Last week Blair Jenkins, head of the cross-party independence group Yes Scotland, gave a speech in which he condemned ‘the corrosive and cynical world of Westminster’, English ‘warmongers and job-cutters’, ‘asset strippers and mortgage flippers’ and ‘welfare bashers and bedroom taxers’.Yesterday a spokesman for the Scottish National Party said: ‘While we recognise Justin Welby’s comment as the humorous remark it is intended to be, we want Scotland to work positively with our neighbours as equal partners on a range of issues – a status that only a yes vote next year will secure.’

Mr Welby delivered his speech last week, but the release of its controversial contents was held back by Lambeth Palace officials until after the christening of Prince George. In the sermon, he repeated his previous attacks on payday loan companies like Wonga, which he has accused of being guilty of ‘usury’ – a ‘sin since Moses’. He defended his claims that people could end up owing thousands of pounds for loans at annual interest rates of up to 5,500 per cent, saying the publicity his remarks received has given huge impetus to calls for reform.

Mr Welby said: ‘It was an accident in which God was involved. ‘It has created such momentum that there is a great new movement to change the way we do community finance.’ The Archbishop also referred to the Icelandic banking scandal, when three major lenders collapsed in the autumn of 2008, taking with them billions of pounds of international investors’ money. He compared it with the impact of recession in Britain. ‘Lest we look at the world and sneer, let us sometimes remember our own faults,’ the Archbishop said.

‘In Iceland there is the pain of the crash which took place five years ago. ‘In every diocese in England churches take part in food banks, in a society which has no need for such imbalances of wealth. ‘On the richest continent on Earth we cannot devise an economic system that provides for the poor and yet forces the wealthy and the powerful to share equally the burdens of debt, and the heritage of materialism gone mad.’ -Dailymail