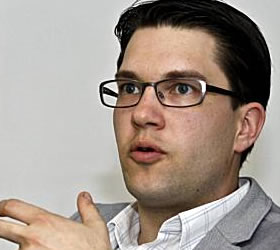 A far-right party in Sweden has won seats in parliament for the first time, denying the governing centre-right coalition an overall majority.

The anti-immigration Sweden Democrats have won 20 of the 349 seats in the country’s single assembly, following Sunday’s general election. The alliance led by centre-right Prime Minsister Fredrik Reinfeldt fell short of a clear victory with 172 seats. Mr Reinfeldt says he will seek the support of the opposition Green Party. The Greens are currently allied with the centre-left Social Democrats. Continue reading the main story.

Mr Reinfeldt also did not rule out working with the Social-Democrats. “On many questions there is a possibility for broader co-operation,” he told reporters. “Not seldom have agreements been made between Social Democrats and alliance parties, but I can’t really say more about that, if there is any room for that now.”

However the prime minister reiterated that his four-party Alliance for Sweden would not form a coalition with the far-right. “I have been clear on how we will handle this uncertain situation,” he said. “We will not co-operate, or become dependent on, the Sweden Democrats”.

Sweden Democrats leader Jimmie Akesson said his party would use the opportunity to make itself heard, as it had not been invited to official debates during the campaign.

“We have in many ways been treated as anything but a political party in this election,” he said.

“Even so, today we stand here with a fantastic result. The situation is a bit uncertain just now, but we have four years ahead of us to speak out on the issues that matter to us and influence Swedish politics.”

BBC regional reporter Damien McGuinness said the success of the far right has shocked many voters in Sweden.

He says the Sweden Democrats appear to have tapped into voter dissatisfaction over immigration.

Immigrants make up 14% of the country’s population of 9.4 million.

The centre-left Social Democrats have ruled Sweden for 65 of the past 78 years, and are credited with setting up the country’s generous welfare state.

Conceding defeat on Sunday, party leader Mona Sahlin said they had not been able to win back voters’ confidence.

“The Alliance is the largest majority. It is now up to Fredrick Reinfeldt how he plans to rule Sweden without letting the Sweden Democrats get political influence.” – BBC