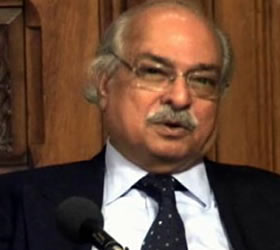 LONDON, (APP)-Praising the yeoman services being rendered by British-Pakistani doctors in Britain , Pakistan’s envoy to the United Kingdom (UK) Wajid Shamsul Hasan urged them to establish institutions in their land of origin to help local doctors meet the challenges of rapid advancement in medical sciences.“Members of DOGANE may form groups to consider venturing into establishing institutes in Pakistan related to the field of medicare in order to make our medical graduates more competitive and acceptable on merit,” the High Commissioner said at the sixth annual meeting of Dow Medical College Doctors Association of North East (DOGANE) at Waltham Forest Assembly Hall Saturday evening.
“They must be helped to raise their standards to be a position to the challenges of rapid advancement in medical sciences that are taking places in other countries particularly in the UK,” he added.
Hasan noted with pleasure that doctors of Pakistani origin constitute approximately seven per cent of the medical practitioners and doctors in the UK. “The contribution you have made to this society, in your land of adoption gives Pakistan a sense of pride,” the High Commissioner stated.

Hasan commended the hard work and commitment to service being rendered by them in the UK  health care and said their professional competence has filled a gap in the UK for learned and committed medical practitioners.
Speaking of the new immigration rules in the UK giving preference to the EU (European Union) nationals, the top diplomat said doctors of Pakistani origin definitely have a professional edge over their European counterparts because of their better English language skills.

He assured DOGANE of complete support to enhance opportunities for Pakistani doctors to come to the UK, learn and serve the needy through advance healthcare and said the High Commission has been in constant touch with the UK authorities including the Home and Foreign Office on immigration related matters of  the expatriates. “These UK organizations also consult us on these matters. We always give our views to the UK Government after discussing the issue at hand with relevant community representatives.”

Wajid Shamsul Hasan also spoke about the floods ravaging Pakistan and said the estimated cost of damage is around US$ 45 billion. He thanked the association for raising over two million rupees toward the flood relief efforts.
He suggested the Association to finance some healthcare reconstruction projects in Pakistan’s villages such as rebuilding basic health units and dispensaries.

British Muslim MP Rahman Chisti also addressed the gathering and spoke about the difficult challenge facing Pakistan. He said in this context members of DOGANE can play constructive role in removing perceptions about Pakistan and improve its international image. He also  pointed out that Britain has been the single largest donor in Europe to Pakistan for flood relief efforts.

Dr Shahid Qureshi, the outgoing President of DOGANE, presented the annual report and said the Association remains the single largest body of Pakistani doctors in the UK. He stated that some 200 former graduates of Dow Medical College, Karachi, are working in the UK as medical practitioners.

The newly elected head of the Association Dr.Iftikhar Yousaf said the DOGANE has raised 10,000 pounds for Pakistan flood appeal during the past three weeks. A cheque of this amount was presented by the High Commissioner to the representative of Pakistan Medical Association.  – App