Omani Sultan Qaboos, Who Ruled Oman For Half A Century, Dies At 79 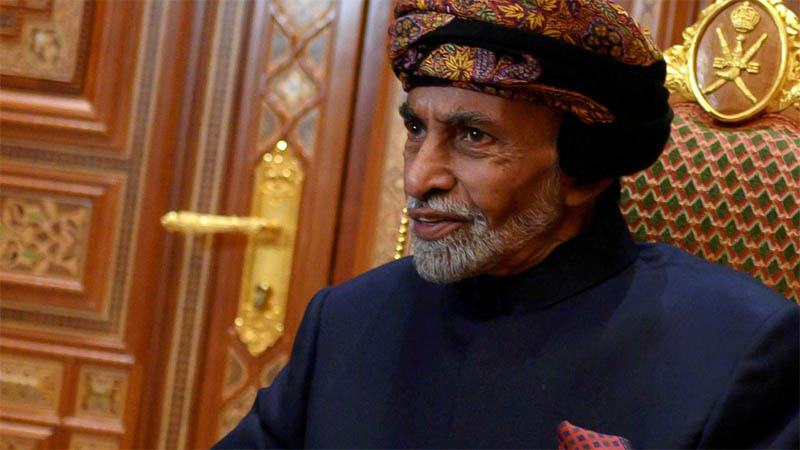 UK Prime Minister Boris Johnson and the Prince of Wales have arrived in Muscat for a condolence ceremony as the country marks three days of mourning. Widely seen as popular, Qaboos set Oman on a path to development after coming to power in a bloodless coup in 1970. His cousin Haitham bin Tariq Al Said has been sworn in as successor.
Qaboos had no heir or a publicly designated successor, and the family council had three days to choose one. But in an apparent swift and smooth transition, they opted to open the sealed envelope in which the late sultan had secretly left his own choice.

Crowds gathered at the capital’s Sultan Qaboos Grand Mosque on Saturday before Qaboos was buried in a family cemetery. No cause of death has been confirmed but media reports suggest he was suffering from colon cancer.

How Sultan Qaboos weathered the Arab Spring
The emirs of Kuwait, Qatar and the United Arab Emirates as well as the king of Bahrain and the Tunisian president were among the foreign leaders who travelled to Muscat for the ceremony at al-Alam Palace. The Japanese Prime Minister, Shinzo Abe, who is touring the region, was also expected to pay his respects.

Mr Johnson, who said Qaboos had left a “profound legacy, not only in Oman but across the region”, would also meet the new sultan in Muscat, according to Downing Street. Other foreign leaders and ministers paid tributes to Qaboos, who maintained the country’s neutrality amid unrest throughout the region, including:

US President Donald Trump, who said Qaboos was a “true partner and friend” to the US, whose “unprecedented efforts to engage in dialogue and achieve peace in the region showed us the importance of listening to all viewpoints”Israeli Prime Minister Benjamin Netanyahu, who described him as a “great leader who worked tirelessly to promote peace and stability in our region”

Iran’s Foreign Minister Mohammad Javad Zarif, who also travelled to Muscat, called the death “a loss for the region” while French President Emmanuel Macron said Oman lost a “man of spirit and culture… deeply attached to his Omani roots and open to the world”
The European Union praised Qaboos’ “sense of pragmatism and his unparalleled savoir-faire” while UN Secretary-General António Guterres said he was “committed to spreading messages of peace, understanding and coexistence”.

Who was Qaboos?
For almost five decades, Qaboos completely dominated the political life of Oman, which is home to 4.6 million people, of whom about 43% are expatriates. At the age of 29, with British support, he overthrew his father, Said bin Taimur, a reclusive and ultra-conservative ruler who banned a range of things, including listening to the radio or wearing sunglasses, and decided who could get married, be educated or leave the country
Described as charismatic and visionary, Qaboos was also an absolute monarch and any dissenting voices were silenced
He pursued a neutral path in foreign affairs and was able to facilitate secret talks between the United States and Iran in 2013 that led to a landmark nuclear deal two years later
Qaboos’ successor is his cousin Haitham bin Tariq Al Said. The 65-year-old is an Oxford University graduate and experienced government official.

He served as minister of culture and heritage and spent years working in top posts in the foreign ministry. He also leads Oman’s Vision 2040 initiative, which is planning social and economic reform, in part to make the country less reliant on oil and gas exports for revenue.

The new sultan is known to be a sports enthusiast and was the first head of Oman’s football federation in the early 1980s. He has also owned private businesses with his brother, including the real-estate venture Blue City, Reuters news agency reports.Observers say the sultan, who is married with two sons and two daughters, has good relations with both Arab and Western leaders.

Bader al-Saif, an assistant professor of history at Kuwait University, described Sultan Haitham as a “quiet character”, an “anglophile” and a “tried administrator” with decades of experience in government. He said Qaboos chose him as his preferred successor because he “resembles” the late leader. BBC NEWS