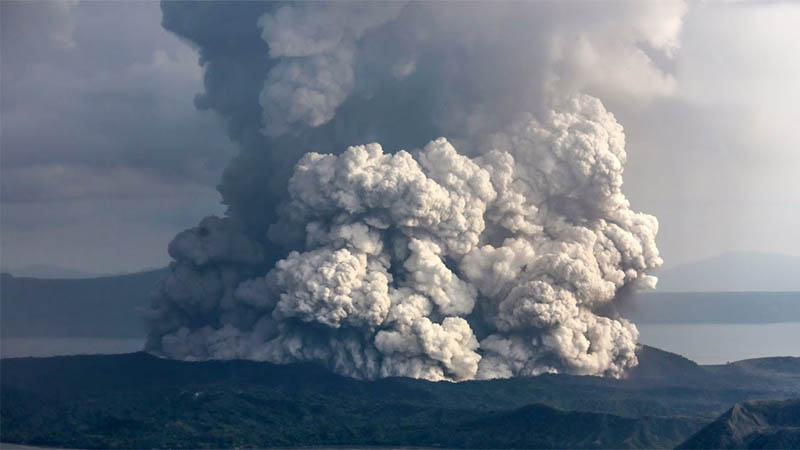 Philippine authorities have urged a “total evacuation” of nearly half a million people near the capital Manila, after a volcano spewed ash up to nine miles (14 kilometers) into the air Sunday prompting warnings of a possible “explosive eruption.”

The Taal Volcano, about 37 miles (60 kilometers) south of the capital Manila on the island of Luzon, is one of the country’s most active. Images from the scene on Monday showed streams of lava beginning to gush out the volcanic vent, the sky above still thick and dark with ash and steam.

The Philippine Institute of Volcanology and Seismology (PHIVOLCS) has raised the alert level to four, meaning an “explosive eruption” could happen in the coming hours or days. Its highest alert level is five, indicating an eruption is taking place.

The volcano isn’t actually very big — but it’s considered among the world’s most dangerous, owing to the number of people that live in its immediate vicinity, said Erik Klemetti, a volcanologist at Denison University.
PHIVOLCS has requested a “total evacuation” of everyone within a 17-kilometer (10.5 miles) radius around the volcano. This area, considered a volcanic danger zone, is home to more than 450,000 residents, according to the United Nations Office for the Coordination of Humanitarian Affairs.

As of Monday, more than 16,400 people had sought shelter in temporary evacuation centers set up by the authorities. The total number of evacuees is likely to be higher, however, with many people choosing to stay with family members and relatives in other parts of the country.

Federal authorities are helping the response and evacuation operation, The army sent 20 military vehicles and 120 personnel to help affected residents, and the secretary of national defense said helicopters were on standby to evacuate people.
The defense secretary also urged residents near the eruption to evacuate, and not to hesitate in leaving their homes. Aid organizations like the Red Cross are assisting on the ground by sending rescue vehicles and supplies.

Residents within the immediate area are most at risk from the effects of a potential eruption, including a possible volcanic tsunami in the lake surrounding the volcano, according to PHIVOLCS. There are 10 cities and municipalities surrounding the volcano, some lying outside that evacuation radius — and they are home to nearly 760,000 people, PHIVOLCS said.

The lava now beginning to erupt is dangerous, Klemetti said, as it’s creating “a big lava fountain” that could then spill into nearby towns. But volcanic ash is the biggest danger, said Joseph Michalski, director of the Earth and Planetary Science division at the University of Hong Kong.”The ash is what will kill you, not the lava,” Michalski told CNN. “The ash flow from an exploding volcano can travel hundreds of kilometers an hour.”Other threats include deadly toxic gases emitted from the eruption, and mud flows caused by ash mixing with water vapor in the atmosphere, Michalski added.- CNN News

Omani Sultan Qaboos, Who Ruled Oman For Half A Century, Dies At 79