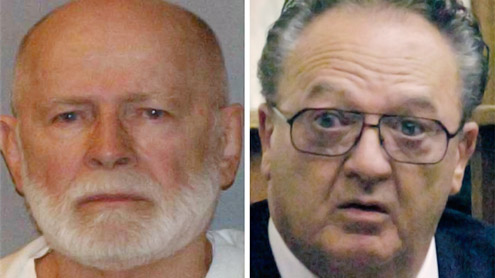 A cold-blooded hitman who has admitted to murdering 20 people has taken the stand today against James ‘Whitey’ Bulger and said he was ‘heartbroken’ when he learned that his former boss was an FBI informant.

John ‘The Executioner’ Martorano, one of the most feared men in organized crime, said on Monday he felt betrayed by Bulger and his partner Stephen ‘The Rifle’ Flemmi – which he said is why he decided to turn state’s witness.Martorano, 72, is a star witness in the Bulger trial. He has said he had a detailed knowledge of many of the 19 murders Bulger is accused of committing and is expected to testify about Bulger’s other misdeeds during his reign of terror as a Boston organized crime boss.He described shooting dead rival mob member Alfred ‘Indian Al’ Notorangeli from a car in 1974 while Bulger rode behind him another car that was ready to block out anyone to tried to get in the way of the hit.

Before Martorano killed Notorangeli, he gunned down bartender Michael Milano, who had the misfortune of driving the same car as Notorangeli. Martorano called that murder ‘a mistake,’ because Milano wasn’t the intended target.A crime scene photo from the time reveals Milano’s car riddled with bullet holes.Martorano also said he killed one of Notorangeli’s henchmen, Albert Plummer, in a hail of bullets.

He served just 12 years in prison after admitting to the killings under a plea deal. He now lives in a quiet suburb of Boston on a golf course. He testified that he collects Social Security.However, he was also paid $250,000 for the film rights to his story and has made $80,000 off a 2012 book about his life titled ‘Hitman.’He has also been paid thousands by the U.S. government, including a check for $20,000 from the Drug Enforcement Agency gave him when he was released from prison.

Martorano worked closely with Bulger and Flemmi from the 1960s until the 1990s. On the witness stand on Monday, he called the men ‘my partners in crime, my best friends, my children’s godfathers,’ according to the Boston Globe.’After I found out they were informants, it sort of broke my heart,’ Martorano said on the witness stand. ‘They broke all trust that we had, all loyalty.’

Martorano is, by his own admission, a brutal killer. He worked as the lead enforcer and hit man for Bulger’s Winter Hill Gang, for whom he gunned down at least 20 people.His victims include two businessmen who Bulger allegedly ordered killed because they had discovered that Bulger was skimming profits of a Connecticut company.Martorano shot millionaire Roger Wheeler between the eyes in the parking lot of his Tulsa, Oklahoma, country club in 1981. The following year Wheeler’s business partner, John Callahan, was found shot dead in the trunk of his car at Miami International Airport.

In 1968, he tracked down a black man who had beaten up Flemmi and found him in his car with a 19-year-old woman and a 17-year-old teen. He killed all three with close-range gunshots.Bulger, 83, face 32 counts of a federal indictment alleging he committed murders, ordered others, extorted bookies, drug dealers and legitimate businessmen, laundered his profits and amassed an arsenal of weapons.During much of his criminal career he was protected by a corrupt FBI agent, who designated him as a high-level informant.When he was indicted in 1995, he skipped town and evaded police for 16 years. For much of the time, he lived a quiet life in Santa Monica, California. He has denied all charges.