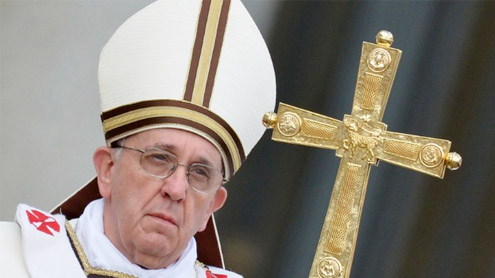 Pope Francis said a “gay lobby” exists inside the Vatican, a surprising disclosure from a pope who has alreadydelivered his share of stunners, and a resurrection of church conflicts that had bedeviled his predecessor’s papacy.

“In the Curia,” Francis said, referring to Catholicism’s central bureaucracy, “there are holy people. But there is also a stream of corruption.”“The ‘gay lobby’ is mentioned, and it is true, it is there,” Francis continued. “We need to see what we can do.”Hints that the Holy See contained a network of gay clergy surfaced last year in reports about a series of embarrassing leaks to Italian journalists.The “Vatileaks” scandal factored in Pope Emeritus Benedict XIV’s shocking decision to resign earlier this year, according to some church experts, as it impressed upon the 86-year-old pontiff that the modern papacy requires a vigorous and watchful presence.

Francis’ enigmatic comments came during a meeting Sunday with CLAR, the Latin American and Caribbean Confederation of Religious Men and Women, who head Catholic communities of priests, sisters and monks. The Chilean website Reflection and Liberation, which focuses on liberation theology, first reported Francis’ remarks.A Vatican spokesman told CNN, “The Holy See Press Office has no official comment on the private meeting.”Gay and lesbian Catholic groups did not immediately respond to requests for comment.

The Survivors Network of Those Abused by Priests said, “structure, not sexuality, is the real issue.””The church is a monarchy. Monarchs are unaccountable. So many monarchs are corrupt. This is true in both secular and religious institutions,” SNAP said in a statement.Other Catholics counseled caution about reading too much into the pope’s remarks.”We don’t have any explanation of what ‘gay lobby’ means,” said Rocco Palmo, a Vatican watcher who runs Whispers in the Loggia, a website on Catholic news and church politics.

“Naturally, some in the church will try to polarize or interpret this, but as the rest of us aren’t pope, we still have to get further explanation,” Palmo added.Church experts say the Chilean report rings true since the wide-ranging conversation centers on concerns that Francis has made touchstones of his nascent papacy.In contrast to the buttoned-up Benedict, Francis has earned an early reputation for speaking off the cuff, often ditching prepared remarks in favor of more informal conversations.

On Friday, Francis nixed his “boring” speech and instead took questions from young Catholic students. Asked by a little girl if he wanted to be pope, Francis laughed and said that only someone who “doesn’t love himself” would want the position.”He has said some things that would turn Benedict whiter than the papal vestments,” Palmo joked.Francis told the Catholic leaders on Sunday to focus on the poor, that the Vatican must be reformed, and joked that whoever wagered on his long-shot election as pope “won a lot, of course.”

But his comments on the “gay lobby” are likely to gain the most attention, especially in the West, where Catholic leaders have been mounting a fierce fight against same-sex marriage.After Benedict announced his resignation in February, reports circulated that a “gay lobby” had forced his hand.Cardinals appointed by the former pope to find the source of the leaks investigated high-level Vatican clergy involved in homosexual affairs who might have been vulnerable to blackmail, according to La Repubblica, a leading Italian newspaper.

La Repubblica reported that the cardinals found evidence of a “gay lobby” within the Vatican but gave few details about it.”Some high level clergy are exposed to the `external influence’ – what we would call blackmail – of lay people to whom they are connected through ties of a `worldly nature,'” La Repubblica wrote.The Vatican blasted the newspaper reports as “unverified, unverifiable and completely false.”Francis is one of the few Catholic leaders to have seen the Vatican report.

The so-called Vatileaks scandal led to Benedict’s butler, Paolo Gabriele, being convicted on charges last year of leaking private papers from the the pope’s private office. He was sentenced to 18 months in prison.’Gay lobby’ behind pope’s resignation? Not likely.John Allen, CNN’s senior Vatican analyst, has said it would have been odd if the Vatican report had not considered the possibility that “insiders leading a double life,” including sexually active clergy, might be vulnerable to pressure to betray the pope.“It seems a stretch, however, to suggest this is the real reason,” behind Benedict’s resignation, Allen said.

In one of his first actions as pope, Francis created a council of eight cardinals, including Cardinal Sean O’Malley of Boston,  to offer suggestions on reforming the Vatican.“The reform of the Roman Curia is something that almost all Cardinals asked for in the congregations preceding the Conclave,” Francis said, referring to the meetings that led up to his election in March. “I also asked for it.”But Francis said that he cannot promote the reform himself. “I am very disorganized,” he said “I have never been good at this.”Instead, the pope said, he is relying on his eight appointed cardinals to move the reforms forward. – CNN