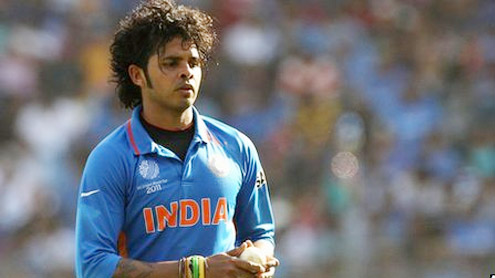 Three Indian cricketers have been arrested over allegations of spot-fixing in the Indian Premier League.The players – S Sreesanth, Ankeet Chavan and Ajit Chandila – are all from the Rajasthan Royals team.

The team said it had “a zero-tolerance approach to anything that is against the spirit of the game”, and India’s cricket board suspended the players.There has been no word from the cricketers themselves, but Sreesanth’s family said he was innocent. Spot-fixing involves illegally rigging parts of a match, for example by timing the delivery of a deliberate wide or no-ball, to benefit bookmakers or those betting on matches.

Police said they had also arrested 11 bookmakers.Rajasthan Royals are captained by legendary Indian batsman Rahul Dravid and owned by Bollywood actress Shilpa Shetty and her businessman husband Raj Kundra.Fast bowler Sreesanth has represented India in many international games. He has played 27 Tests and 53 one-day internationals.”I have full faith in him, he would never do anything like this,” his mother Savitri Devi told the BBC Hindi service.

The players were arrested in Mumbai late on Wednesday and they are expected to appear in court in Delhi later on Thursday.At a press conference on Thursday afternoon, the city’s police chief Neeraj Kumar gave out the details of what he called the “spot-fixing scam”.He said: “There was an agreement between bookies [bookmakers] and players that in a certain over they would give away minimum amount of runs. The bookies also gave them directions that they have to indicate that they are ready to give away those many runs.

“The indications that players had to give bookies included rotating their watches, putting towels in their pants, taking out locket from shirt, taking out shirt and vest that you’re wearing, make signs with jersey.” Mr Kumar said the team matches on 5 May with Pune, 9 May with Punjab and 15 May with Mumbai were fixed.Earlier in the day, the Board for Control of Cricket in India (BCCI) suspended the three players.”The IPL governing council has met and decided that the cricketers found involved will be dealt with severely,” the board said in a statement.

“As of now, the three players – Ankeet Chavan, Ajit Chandila and S Sreesanth – stand suspended pending enquiry. All information required to bring the persons involved to book will be collected and strictest action will be taken, if found guilty,” it added.BCCI president N Srinivasan told reporters that he was “shocked” by the developments.”I don’t know about others but I am shocked, the BCCI never expected it. It was a bolt from the blue. We will see whatever is there to be done is done,” he said.The team owners Rajasthan Royals also issued a statement saying they had “been informed that three of our players have been called in for investigation on spot-fixing in matches. We are completely taken by surprise.

“We do not have the full facts at this point and are unable to confirm anything. We are in touch with the BCCI on this matter. We will fully co-operate with the authorities to ensure a thorough investigation.”The sixth season of the IPL, which is considered to be the world’s showcase for Twenty20 cricket, is currently under way in India.Top Indian and international players take part, contributing to what is the world’s richest cricket tournament.

The scandal is the latest to affect cricket.Last year, Indian cricket officials suspended five players after a sting by undercover TV reporters purported to show cricketers agreeing to bowl no-balls and spot-fix matches.And in 2011, three top Pakistani players – Salman Butt, Mohammad Asif and Mohammad Amir – were banned after they were found guilty of involvement in a betting scam. – BBC