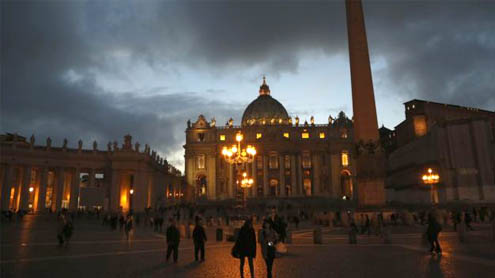 Pope Emeritus Benedict XVI, who resigned as pontiff last month, has pledged his “unconditional reverence and obedience” to whomever succeeds him to guide the 1.2-billion-member Roman Catholic Church.

As cardinals continue their discussions, Vatican experts ask what kind of pope do they believe will be best suited to lead the church?The Rev. Thomas Reece, at Georgetown University, said the cardinals will be looking for someone who can best convey the Catholic message.

“The most important thing is to figure out how to preach the gospel in a way that is attractive and understandable to people in the 21st century – especially young people,” said Reece. “Certainly in the north, in Europe and the United States, we see young people leaving religion, not just Catholicism, but Christianity and other religions. So, how to make the message of Jesus, which I think is very attractive and challenging, get it across to young people so that it doesn’t turn them away. That is the real challenge.”

In other words, said Rev. Robert Barron, rector of Mundelein Seminary in Chicago, the cardinals would want “someone who is a skilled and gifted evangelizer.”“Once you say that, then you are saying someone with a lot of theology, theological acumen, someone with good communications skills, someone who knows lots of languages – certainly true since John Paul was pope,” said Barron. “But I would say the major rubric under which they see all this is an evangelizer, someone who can proclaim the gospel effectively to the wider world.”

Many experts said the cardinals also will discuss whether it is time to elect a pontiff who is not European. Forty-two percent of the world’s Catholics are in South America and 24 percent live in Africa, where the church is growing.But experts also pointed out that more than half of the cardinals are European, which gives them a distinct advantage when it comes to electing a pope.The cardinals will be looking for someone who is a good manager and who could reform the Vatican bureaucracy known as the Curia, especially following the scandal involving the pope’s butler who stole documents, some of them revealing alleged corruption in the Curia.

Reece is somewhat skeptical. He said “there has been talk for decades about reforming the Vatican bureaucracy and none of the popes have been able to accomplish it.”Experts said as the cardinals discuss who is best qualified to become pope, they are facing a unique situation, the presence of a former pontiff – Benedict XVI, now living not far from their deliberations.Some experts asked: will he play a role in future Vatican affairs?

Not according to church historian Chris Bellitto, teaching at Keane University in Union, New Jersey.“If this pope wanted to have a hand in affairs, then he wouldn’t have resigned,” said Bellitto. “And stylistically, I cannot see this man interfering. He has spent his entire life for the institution. If he meddled, he would be undermining the institution. And I just don’t see it happening.”

Reece said Benedict is “perfectly happy in his room and his library, reading his books.”“The question is, will he write? If he writes, then there is always the fear that people will look at his writings and say, ‘Well, Benedict says this, but the new pope says that.’ And that would not be healthy for the church,” said Reece.Barron agreed that the former pontiff will not insert himself in the affairs of the church, but he is uneasy about Benedict’s decision to resign the papacy.

“I do have a little bit of a concern about the precedent-setting quality of this, if it becomes the norm that popes resign or retire, because who knows in the future what troubles that might cause and what ambiguity it might cause,” said Barron. “So I get that. I get how this is certainly unusual and maybe not the best precedent for the future of the church, I understand that.

But this particular ex-pope, I think, will not cause any trouble in that regard.”Pope Emeritus Benedict XVI currently is living in Castel Gandolfo outside Rome, waiting to move into his permanent facilities inside the Vatican walls.Ironically, he will not be able to vote for a new pontiff because he is over 80 years of age – the limit set for any cardinal voting in a papal election. – VOA