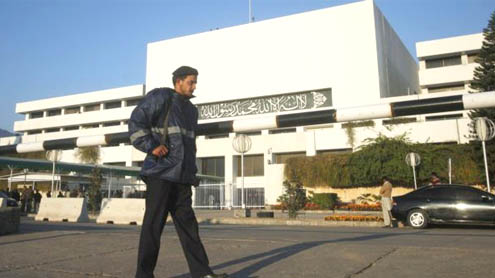 ISLAMABAD: Pakistan’s Election Commission says it is taking all measures necessary to secure the safety at 80,000 polling stations and ensure free and fair elections in the upcoming national vote. If successful, the election will be Pakistan’s first transfer of power between civilian governments since the country gained independence in 1947.

In a series of firsts for Pakistan, commission official Muhammad Afzal Khan says work is being done to ensure that the roughly 10,000 candidates for Pakistan’s 1,000 national and provincial government spots have clean financial and legal records.Khan says officials will film and review every major candidate’s political campaign. He also says the nation’s civil registry of voters has been cleaned up and that the practical logistics on ballots and ballot boxes is almost complete.He dismisses criticism that the commission has bowed to political pressure.

“We are not going to be distracted from our main national mission and objective: that is of holding of the country’s best, cleanest, intimidation-free, fairest election – the election in which the loser will say, yes they have lost, but genuinely,” said Khan. “We are not going to succumb to any pressure. We don’t take any pressure.  We don’t take any dictation.”Bilal Mehboob, of the Pakistan Institute of Legislative Development and Transparency, cautions that the country’s legal system and maze of regulations means it will not be easy to conclude the investigations Khan is talking about in such a short period of time. The elections are expected to take place within three months.

“The realistic thing would be that yes, the election commission is making a lot of efforts and trying to do things which have not done before,” said Mehboob. “So I think yes, they will probably be making much better efforts this time.  But this is yet to be tested, what systems they are putting together, how much foolproof that system is.”Mehboob says the biggest problem in the upcoming election is security, not fraud. He says militant groups like the Taliban want to disrupt the democratic process, which they believe is against the teachings of Islam.

According to Khan, the commission is meeting with federal and regional government and security officials to ensure the safety at the roughly 80,000 polling stations.”We have made a lot of ground work, spade work, just focusing on the security. We would be focusing on the areas which require more and more, the high-sensitive areas and preemption is better than cure,” added Khan. “Whatever preemption can be secured – that will be done, what is humanly possible.”

International and national observers are expected to monitor the elections, but there are concerns about their safety, as well. Khan says, if it were up to him, he would have cut observers out because they will detract from security forces needed to secure polling booths around the country.”Had there been ideal security situation, I would not have said that it should be a limited number, but this is the ground reality.  Because if one observer is hurt it would damage our whole process and our image,” said Khan.

Pakistan has some 85 million registered voters out of a population of roughly 190 million. Of those voters, some 10-15 million are living in violent areas, home to militants, nationalists and armed political groups.Mehboob and other analysts say there are efforts underway to reach some kind of ceasefire or truce with the Taliban to prevent bloodshed during the elections.

Although the date of the election has not been announced, it is expected to take place in May. Prime Minister Raja Pervez Ashraf insists nothing will detract from the vote.”Our government has always been committed to holding elections on time and create history by ensuring the transfer of power by a political government as required under the constitution,” said Ashraf. “We can take pride that we are delivering on this commitment.”If successful, it will be the first time a civilian government has handed power  to another civilian government through the ballot box. – VOA