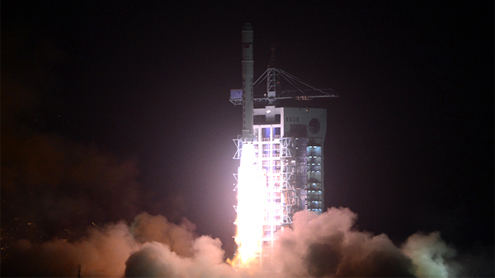 JIUQUAN: A Turkish Earth observation satellite was successfully sent into space from northwest China early on Wednesday morning, marking the completion of this year’s space launches.

A statement released by the Jiuquan Satellite Launch Center in northwest China’s Gobi Desert said the Turkish satellite, the GK-2, was launched at 12:13 a.m. and was delivered into its predetermined orbit by a Long March 2D carrier rocket.It marked the 174th flight of the Long March series of carrier rockets.The State Administration of Science,Technology and Industry for National Defence said on Wednesday that this was the first time a Long March 2D carrier rocket had been used for such a launch on behalf of another country, marking a breakthrough for the entire Long March series in international commercial launching of low-earth-orbit satellites.

Also according to the administration, China’s aerospace products’ successful entry into the West Asia and North Africa markets will help the country expand its international market of commercial satellite launching services.The launch of the Turkish satellite was based on a contract signed by the China Great Wall Industry Corporation (CGWIC) under the China Aerospace Science and Technology Corporation in May 2011.The CGWIC is an organization authorized by the government to provide satellite in-orbit delivery, commercial launching and aerospace technology applications in China, according to the company’s website.

The satellite, jointly developed by Turkey’s Space Technologies Research Institute and Turkish Aerospace Industries, Inc., will mainly be used for environmental protection, mineral resource exploration, urban planning and disaster monitoring and management, according to the statement.China successfully sent 28 satellites or spacecraft into space via 19 launches this year, it said, adding that the most significant achievement was seen in June with the country’s first manned space docking maneuvers.

Next year, China will carry out a manned space docking test between orbiting target module Tiangong-1 and the Shenzhou-10 spacecraft. It will also send the Chang’e-3 moon probe into space, which is expected to land and stay on the moon in the second stage of the country’s lunar probe program. – Xinhuanet

Turkish airline buys up to 100 Airbus jets for $12 billion

Turkish airline buys up to 100 Airbus jets for $12 billion