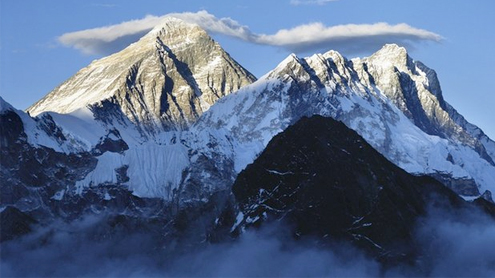 The US space agency, Nasa, has admitted it mistook a mountain in India for Mount Everest when it posted online a picture taken from space.

Nasa initially said the photo – by Russian cosmonaut Yuri Malenchenko – showed the world’s tallest summit.The image was quickly picked up by a number of media outlets, but Nasa removed it after a Nepalese expert spotted the error.Everest, which is 8,848m (29,028ft) high, straddles the Nepal-China border.”It is not Everest. It is Saser Muztagh, in the Karakoram Range of the Kashmir region of India,” a Nasa spokesman said in an email to the BBC.

“The view is in mid-afternoon light looking north-eastward,” the spokesman added.Nasa said that Malenchenko had taken the picture from the International Space Station (ISS) earlier this month.The photo quickly spread on Twitter, triggering criticism from the Nepalese community.Journalist Kunda Dixit, an authority on the Himalayas, tweeted: “Sorry guys, but the tall peak with the shadow in the middle is not Mt Everest.”However, he himself first wrongly guessed that it was “Xixapangma in Tibet”.On Thursday, Ron Garan – a US astronaut who lived aboard the ISS last year – tweeted: “We r still looking 4 a good view of illusive Everest FromSpace Apparently Yuri’s ISS pic’s not Everest It’s Saser Muztagh.” – BBC